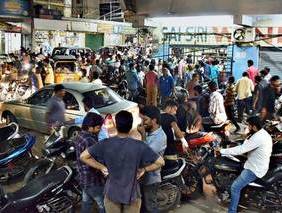 Liquor Shops Open In Lockdown - It Happens Only In India

Liquor Shops Open In Lockdown - It Happens Only In India

Punjab and Kerala have unwittingly (or given the financials involved, maybe knowingly) classified liquor as an essential item and have allowed liquor shops to remain open during the lockdown. Hence, tipplers need not worry. Their elected representatives have for once acknowledged their pain and have done something to alleviate it.

It is another matter that in these times, your daily alcohol intake is less important than protecting you from Covid-19. One had the occasion to witness the mad scramble (in Kolkata) outside liquor shops the day before the lockdown started in West Bengal. Disregarding all safety norms, people were standing in queues without maintaining a safe distance, were spitting on the roads, pushing each other and shouting in each others' faces. If even one of them was an asymptomatic carrier of the virus, it was a sure recipe for community transmission.

In any case, if people are so addicted to the brew, they needed to have the sense to stock up before the lockdown. There is absolutely no need to keep liquor shops open. It defeats the purpose if you allow things which lead people to party with friends and liquor is definitely one of them. Even if people decide to stay at home, they might have the urge to party if they know liquor shops are open. Also, states bordering Punjab and Kerala have kept liquor shops closed. Hence, people from those states will make a beeline for border towns in the two states to buy liquor, adding to the crowds and increasing the risk.

In fact, such is the draw of liquor that when people came to know that hand sanitizer is made up almost entirely of alcohol, they started wondering whether direct consumption of liquor would give them immunity from getting infected since sanitizing hands was said to prevent infection. There was a rumour in the US that spraying the body with alcohol would prevent one from getting infected.

But the Punjab and Kerala governments have done a disservice to the community by allowing liquor shops to remain open during the lockdown. In India, there are many things that a given set of people can call essential. If the administration is to allow shops selling those things to keep open, there would be no lockdown for all practical purposes. Drinking liquor is the private preference of the citizens and no one can object to that if it is not done in a public place. But congregating before liquor shops during a lockdown is not to be allowed for health reasons.