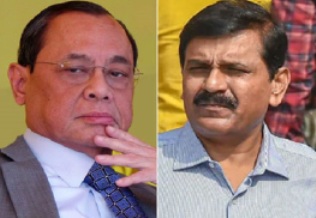 Editor-in-Chief of indiacommentary.com. Current Affairs analyst and political commentator. Writes for a number of publications. View all posts by this Author
The Supreme Court did well to refuse to accept the apology tendered by M Nageshwar Rao, ex-interim director of the CBI, for going against its earlier order and held him and S Bhasu Ram, Director of Prosecution in the agency, guilty of contempt of court. The court fined them Rs 1 lakh each and although it could have sent them to jail for three months, just made them sit in a corner of the court till the end of the days proceedings.

Rao had, in contravention of the apex courts earlier order, transferred A K Sharma, the officer who was working on the Bihar shelter homes rape case. Although he later tendered an apology where he stated that "I sincerely realise my mistake and while tendering my unqualified and unconditional apology, I specially state I have not wilfully violated the order of this court as I cannot even dream of violating or circumventing order of this court." That it was not enough to placate the court was clear in the way CJI Ranjan Gogoi thundered you have played with our orders. God help you." Justice Gogoi later said that he had punished someone for contempt of court for the first time in his long career.

To be fair to Rao, the transfer of Sharma happened as part of the overnight mass transfers that the government ordered as a tactic to defuse the unsavoury situation arising after the public feud between the former CBI chief Alok Verma and his former deputy Rakesh Asthana. Nageswar Rao himself had just been elevated to the top post on a temporary basis. But being an old hand in the agency, before affecting the mass transfers he should have identified officers whose transfers were expressly prohibited by the courts. In not doing so, he ran himself foul of the apex court orders.

The court, on its part, was absolutely correct in not showing leniency by accepting the apology and letting things pass. The way institutions are being politicized and plaint officers are being made to carry out the executives bidding, if the courts are not strict when laws are broken or if orders are violated or circumvented, then there will be total chaos and the ruling dispensation will do much as it pleases with scant regard for the law. With this punishment (and the related black marks in the career records of the officers), a forceful signal will go down the bureaucracy that no one can play with court orders.