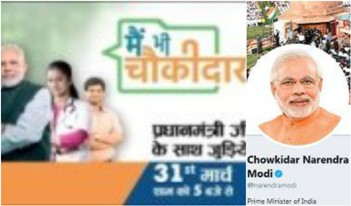 Editor-in-Chief of indiacommentary.com. Current Affairs analyst and political commentator. Writes for a number of publications. View all posts by this Author
With his #MainBhiChowkidar campaign, unleashed a few days ago, and todays action of renaming his twitter handle Chowkidar Narendra Modi, Prime Minister Modi has firmly shown that the BJP is not going to be cowed down by the orchestrated campaign of chowkidar chor hai, started by Rahul Gandhi and now being followed by almost all leading opposition parties.

"Your Chowkidar is standing firm & serving the nation. But, I am not alone. Everyone who is fighting corruption, dirt, social evils is a Chowkidar. Everyone working hard for the progress of India is a Chowkidar. Today, every Indian is saying - #MainBhiChowkidar". This was the message Modi wrote in the video that showed Indians, young and old, from all regions and all walks of life being guardians, or chowkidars, of their homes and thereby of the nation. It also asked citizens to take an oral pledge to be chowkidars, promising a personalized twitter conversation card as a thank you note from the Prime Minister. Modi is going to interact with people on March 31 to further this campaign. Obviously, the video went viral and was the hottest trending topic worldwide for hours.

The latest action of renaming the twitter handle shows that the Prime Minister and the party are going to make anti-corruption one of the main planks, other than the surgical strikes and the mahamilavat nature of the alliance of the opposition parties, of their campaign in 2019, despite the daily accusations being hurled by Rahul Gandhi over the Rafale deal. The chowkidar plank fits in perfectly now as the government is also reported to have decided on Justice (Rtrd) Pinaki Chandra Ghose as Indias first Lokpal. The decision is expected to be announced in a few days. It will not be surprising if the Lopkal is named the Mukhya, or Head, Chowkidar.

Once the Lokpal is in place before the elections, the chowkidar campaign will receive a huge boost. While it will silence the opposition parties (the Congress might create controversy for Mallikarjun Kharge had refused to join the panel mandated to select the Lokpal as a special invitee. He was invited thus because no opposition party got the minimum 10% or 53 seats in the Lok Sabha in 2014 to have a member designated as the leader of opposition, who would have been a co-opted member of the panel), it will prove to the people that the government is serious about curbing corruption in high places.

This overdrive by the BJP to turn the chowkidar chor hai cry on its head is going to put the opposition in a fix. If lakhs of Indians take the pledge and declare that they are also chowkidars, by saying chowkidar chor hai the opposition will be insulting them. Already posters of the Congress and many regional parties have been printed with the theme of declaring Modi chor. But now, there has to be a rethink on the subject. The opposition can take the line that those pledging to be chowkidars as part of the campaign are likely to be BJP voters and their chor campaign is not meant to impress them in any case. But the fact remains that the BJP has made a huge hole in the opposition campaign by unleashing the #MainBhiChowkidar drive.