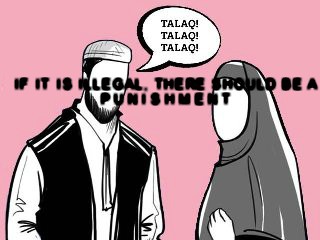 Making Triple Talaq A Criminal Offence is Not Improper

Making Triple Talaq A Criminal Offence is Not Improper

Editor-in-Chief of indiacommentary.com. Current Affairs analyst and political commentator. Writes for a number of publications. View all posts by this Author
There are two points being made against criminalizing triple talaq. The first point that people who are against it being made criminal make is that since pronouncing three talaqs instantly is already illegal (after the Supreme Court judgment) and will have no effect on the marriage, where is the need to punish the husband. They say making it criminal will act as an incentive for the husband to just abandon the wife even without saying the words. They also say that sending the man to jail will in effect punish the family as the wife will face troubles. But they forget that the courts will not  in fact cannot  take suo moto cognizance of the fact, the wife has to complain and she will lodge the complaint only if the husband says the words and leaves her.

The second point being raised is that since marriage is a civil contract between the husband and the wife, criminality should not be brought into it. This is debatable as if triple talaq is illegal and if a man pronounces the words and leaves the wife, he has to be punished for that. Issues of the rights of the wife in particular and women in general are involved. Further, the law cannot be a bystander if a person commits an illegal act which affects the rights of another person in a civil contract that he has with her.

Those who are arguing along the above lines need to look at Sec 494 of the Indian Penal Code (IPC). This section makes it criminal for a Hindu (as also for persons of other religions like Christianity which do not allow a concurrent second marriage) male or female to take on a second spouse if the first one is living. The offending person can be jailed for up to seven years if the other party lodges a complaint. The only exceptions are if the first marriage has been declared void by any competent court or if the person entering into a second marriage has not seen or heard from his existing spouse for seven years and has no knowledge whether the person is alive and he or she discloses the facts to the person he or she is marrying then.

There are many similarities between sec 494 and what is being proposed in case of triple talaq. First, since the second marriage of a Hindu is null and void in the eyes of the law (as is pronouncing instant triple talaq), and the second wife can at best be treated like a concubine without any legal right, where was the need to make it criminal? Second, if, as those against making triple talaq criminal are arguing, making it criminal will act as an incentive for the person to leave his wife without uttering the words, why are Hindus not just leaving their spouses to marry a second time to escape criminal punishment?

Marriages, even though they can be viewed as a civil contract between the spouses, are much more than that. Apart from legal, they also have social sanction. Hence, if a marriage breaks down, both law and society prescribe efforts for rapprochement and reconciliation. Talaq, as per the Sharia, also provides for the same. Instant triple talaq negates that and is hence called talaq-e-bidat or talaq of the wrong innovation as it does not adhere to the three month iddat period. Also, in case of complete breakdown of the marriage, either of the spouses must have the right of divorce. Instant talaq bestows that right only on the husband. Hence, if instant talaq is illegal, then those still using it and leaving the wife must be criminally punished if the affected wife lodges a complaint.