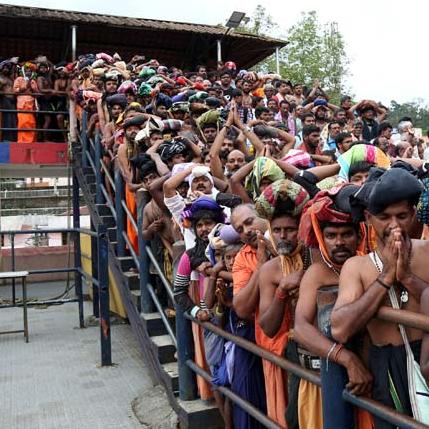 Mobocracy At Sabarimala Makes A Mockery Of The SC Judgment

Mobocracy At Sabarimala Makes A Mockery Of The SC Judgment

Editor-in-Chief of indiacommentary.com. Current Affairs analyst and political commentator. Writes for a number of publications. View all posts by this Author
What is happening at Sabarimala is terrorism. Although the Supreme Court has, in a historic verdict, allowed the entry of women of all ages in the shrine, interested parties and some devotees have created a climate of fear and terror to ensure that not many women made the trip on Wednesday, the first day it opened after protests. Reports emanating from the shrine say that self-styled guardians of Ayyappa are stopping vehicles carrying women and turning them back. Journalists, especially women, are being targeted. One woman has narrated a heart wrenching account about how the mob tried to pull her daughter out of the bus they were travelling in. This is mobocracy at its worst.

The Kerala government is legally and morally bound to ensure that the Supreme Court order is enforced in letter and spirit. But what it is doing is obnoxious. On the one hand, it is trying to project itself as progressive by not filing a review petition against the order and showing that it stands for gender equality while on the other, it has taken no steps to force the trust that runs the shrine to make arrangements for women devotees, arrest the troublemakers and ensure that law and order is maintained at the shrine. In fact, it has held backroom talks with protesters. It proves that it knows who these people are. Then why not arrest them? Such is the fear of the Hindutva lobby and the rise of the BJP in the state that the Left government is treating them with kid gloves. This is a big mistake.

It will embolden these elements. They will not strike now. They will wait for women devotees to come in large numbers and then they will create an unsuspicious accident  perhaps a stampede, to create an atmosphere that will scare women devotees from attempting the pilgrimage. The Kerala government must arrest these protesters and create facilities for women at the shrine. It should implement the SC judgment and leave it on the individual will of the women devotees. If they wish to enter, no one should be allowed to stop them.