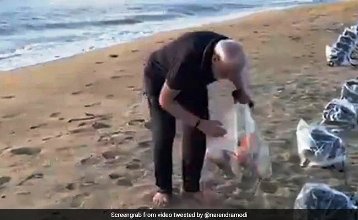 Modi Deserves A Salute For Plogging At Chennai Beach

Modi Deserves A Salute For Plogging At Chennai Beach

The sight of 69-year old Narendra Modi, Prime Minister of India, plogging for nearly an hour at a beach near Chennai gladdened the heart. The Prime Minister has two pet schemes in Swacch Bharat and Fit India. He was walking the talk for both the schemes.

Dressed in a black tee and matching black joggers, Modi carried a bag in which he picked up all plastic waste thrown by merrymakers the previous day. He created huge awareness for both his schemes. He also showed the way to millions of Indians that there is everything wrong in creating a mess on the beaches (or anywhere else) and there is nothing wrong in cleaning up. If the Prime Minister could do it, why canât others?

Many Modi haters and baiters would say that he did it for photo-op. But try doing it yourself? It is backbreaking work for a 69-year old to bend and pick up waste every few steps. The Prime Minister was earnest in what he did and should be appreciated for it.

About a year ago, India Commentary had carried a story about the Prime Minister of Netherlands, Matt Rutte, spilling coffee on the floor of the entrance of the Ministry of Health building in The Hague and then cleaning up. The writer had then written that no politician worth his salt would do the same in India. But Modi has shown that he can clean up even the mess created by others. He has shown that in the New India of his dream, no work is small and contribution from everyone in society is the only way India can be cleaned up.

He deserves a salute.