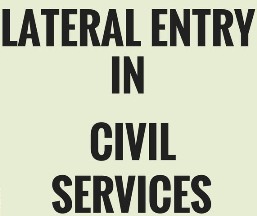 Editor-in-Chief of indiacommentary.com. Current Affairs analyst and political commentator. Writes for a number of publications. View all posts by this Author
The governments decision to allow lateral entry of domain experts for ten joint secretary positions is welcome but it has to be seen as a small step to test the waters  both for the effectiveness of such experts in governance and the resistance the move is most likely to encounter from civil service officers. It is a small step because just ten positions in the huge administrative machinery that makes up the Indian bureaucracy are not going to make much of a difference. The reform will work only if it is introduced on a bigger scale.

Further, the selection process has to be extremely transparent so that the best people are recruited. For this to happen the selection must not be made by a committee  it must be made by the Public Service Commission following a well-defined procedure. This will prevent lobbying and encourage competitiveness. It will also shield the government from future charges of nepotism. If the purpose of the reform is to introduce expertise in governance then all efforts must be made to eliminate favoritism and appoint only the best person for the job.

The need for lateral entry is not disputed. The Indian bureaucracy, barring some notable exceptions, is famous for being lethargic, lacking knowledge and blindly following rules. This has meant that despite the best intentions of successive governments, India has developed at a snails pace. It has also meant that bureaucrats have brainwashed ministers into going for several policies that have only benefited crony capitalists and not the general public.

All areas of governance are increasingly coming under the purview of fast changing technology. Generalist bureaucrats often buckle under the strain. They get domain expertise quite late in their careers and very few of them take the trouble to regularly update themselves with the best practices being followed around the world or technological advances happening in the field. Domain experts, or ones who work in the field from day one of their careers, will bring refreshing ideas and even more refreshing ways to implement those ideas.

But there will be three big stumbling blocks  the pay scale, the work culture and resistance from IAS officers. People who will apply for joint secretary level appointments will not get even a third of what they get in the private sector. How many experts will be interested to take a huge salary cut to serve the nation? Then, private sector experts are result oriented and work at a very fast pace. Both these things are anathema to the government servant. The clash of work culture, coupled with the clash of egos that is likely to ensue, will frustrate these experts. Finally, the union of IAS officers is not likely to allow lateral entry of outsiders without a fight. They will see it as a sign of the government trying to end their immense clout.

If the government can work around these stumbling blocks and provide the experts meaningful roles, India will grow at a faster pace. Even if the government does not work on a profit motive, cutting costs is important for it. These experts are likely to point out wastefulness by identifying leakages. They will identify snags in the delivery process and suggest ways to do away with them, thereby making implementation of schemes faster and surer. They are also likely to introduce professionalism, something that is sorely lacking in Indian bureaucracy, again barring a few notable exceptions.