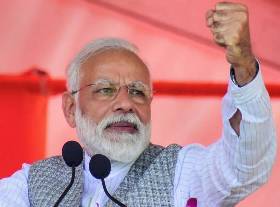 Linus tackles things head-on. He takes sides in his analysis and it fits excellently with our editorial policy. No 'maybe's' and 'allegedly' for him, only things in black and white. View all posts by this Author
Prime Minister Modi took three pledges in his victory speech from the BJP headquarters in Delhi. First, he said, he would never do anything with a bad wish or foul intention. Second, he would not do anything for himself. Third, all his time and efforts would be directed to work for the citizens of India.

Narendra Modi has become the foremost example of a karmayogi, a person who does every work following the path of righteousness. That he is also karmath and a workaholic to boot is an added advantage. His punishing schedule  he is reputed to work for 16 hours every day  in normal times will bring much younger persons to their heels. But his workload during the elections bordered on the extreme. He crisscrossed the country to hold 145 rallies and roadshows. If he was tired, it did not show and his enthusiasm did not wane till the end.

That a majority of the people of India trust the Prime Minister has been proved by his resounding victory in the general elections. They know he does everything with good intention, is not corrupt, runs a clean government and gives his everything for the welfare of the nation and its citizens. They trust him more than any other leader in India by a long margin.

This trust has not been built overnight. Modi has assiduously projected himself as a strong leader who does not shy from taking hard decisions. His tenure was marked by three surgical strikes when Indian forces entered another nation to liquidate those who were harming the nation  twice in Pakistan and once in Myanmar. The people believed him when he said that he needed more time to reverse the wrongs of 60 years of Congress rule. The people were willing to give him more time to set the economy right and bring acche din. During the 2014 campaign, he had said he needed 10 years to change India. The people have trusted him on his word and have given him another 5 years. Now it is upon him to keep their trust.