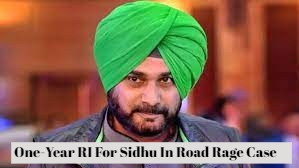 The Supreme Court has, after a review in the Navjot Singh Sidhu road rage case, sentenced him to one-year rigorous imprisonment, reversing its earlier verdict in which it had let him off with just a fine of Rs 1000. Sidhu was acquitted of all charges by the sessions court due to lack of evidence which led the court to give Sidhu the benefit of the doubt. But the Punjab & Haryana Court had found him guilty on the charge of culpable homicide and had sentenced him to three years in jail. The Supreme Court had set aside that judgment and let him off with just a fine of Rs 1000. But the kin of Gurnam Singh, who had died after he was hit by Sidhu, appealed for a review which was admitted by the Supreme Court leading to the current verdict.

In the current verdict too, the Supreme Court has rejected the charge of culpable homicide but retained the original charge of "voluntarily causing hurt" and said that it felt that "there is an error apparent on the face of record ... therefore, we have allowed the review application on the issue of sentence. In addition to the fine imposed, we consider it appropriate to impose a sentence of imprisonment for a period of one year." This is a just verdict and the sentencing is valid as the earlier verdict was too lenient.

Sidhu cannot be held liable for culpable homicide as Section 299 of IPC defines it as "whoever causes death by doing an act with the intention of causing death, or with the intention of causing such bodily injury as is likely to cause death, or with the knowledge that he is likely by such act to cause death, commits the offence of culpable homicide." The operative word here is 'intention' and it will be too far-fetched to assume that any person will hit an unknown person with the intention to kill him just because they are having an altercation over parking space. But he is definitely guilty of "voluntarily causing hurt" under Section 321 of IPC which unfortunately resulted in the death of Gurnam Singh. Hence, he must be punished as per law for that and the fine of Rs 1000 in the earlier verdict was not even a rap on the knuckles.