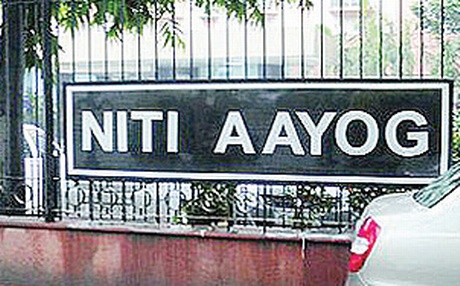 Editor-in-Chief of indiacommentary.com. Current Affairs analyst and political commentator. Writes for a number of publications. View all posts by this Author
It is wasteful to have a think-tank like Niti Aaayog twiddle its thumb and make inconsequential pronouncements. It was constituted to help transform India. But in these nearly two years, not much is known what it has done in this regard. Hence, PM Modis exhortation that it should be the driver of policy change in India is welcome. That India needs drastic policy change is apparent to most. 25 years after the first generation reforms, led by Manmohan Singh and P V Narasimha Rao, had begun dismantling the trade barriers and the walls we had created to isolate our economy and transformed the way India did business; there is still a lot of unfinished business that needs to be done. For, every attempt at further reforms has been half-hearted as governments have lacked the political will to go whole hog. This was mainly due to the fact that somehow, reforms became tainted  they were perceived to be pro-rich.

At the very beginning of Modis tenure, the Rahul Gandhi jibe of his government being a suit-boot ki sarkaar had stopped the NDA government in its track. The government did not want to be seen as pro-rich. That, plus the lack of number in Rajya Sabha. There could be no other explanation for a government widely perceived to be best suited to carry out third generation reforms not having made game changing moves. The government has done a lot to do away with some cobwebs and make doing business in India easier. It has introduced transparency in governance and corruption at the top has vanished. It has created a platform for big ticket reforms. But those few big ticket reforms that could fire the imagination of a new generation of entrepreneurs are still not forthcoming. There is also a lack of talent and thinkers in this government. Hence, prodding the NITI Aayog to be the driver of this change is sensible.

PM Modi has advised the body to come up with a long term plan related to tourism, food, import and exports, technology, use of and identification of untapped natural resources, workforce, procurement, data and alternative sources of energy with focus on solar energy. It cannot be denied that despite a lot of work that has been done in the last two years, the real benefit of the 1991 reforms will come only if third and fourth generation reforms are undertaken without further delay. Once the much delayed GST Bill is passed, the government should, with help and direction from the NITI Aayog, propel the economy by introducing these reforms. Anything lesser would be a betrayal of the massive mandate it had received.