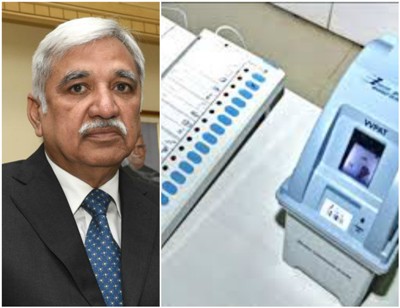 No Question Of Junking The EVMs, Says CEC Sunil Arora

No Question Of Junking The EVMs, Says CEC Sunil Arora

For the first time in several months, someone in authority has said something very logical and sensible. Speaking at the Times Now Summit, Chief Election Commissioner (CEC) Sunil Arora emphatically made the point that there was no question of junking the Electronic Voting Machine (EVM) and returning to the paper ballot system of casting votes.

Opposition parties have been casting aspersions on the EVMs for a long time now. They say that the machines can be tampered with or hacked to rig the elections. They have even shown hackers attempting to tamper with the EVMs. But they have not been able to prove anything. The CEC was right in pointing out that like any mechanical or electronic equipment; the EVMs were also prone to breakdowns like "a car or a pen". But the kind of tampering or hacking being alleged by the opposition parties is neither possible nor is it being attempted.

The biggest proof of this is the number of elections the BJP has lost since coming to power in 2014. If the ruling party was rigging the EVMs, it would have won all the elections. Even if it wanted to show that the EVMs were not being rigged, it would have won a majority of the elections and willfully lost a few unimportant ones. Then why did it lose in Delhi so badly even after it was well known that Amit Shah had put in an enormous amount of effort and his prestige was at stake (if it can ever be in politics)? The Delhi elections were the best time for the ruling party to rig the outcome if the EVMs are actually being tampered with or hacked, as alleged by the opposition parties. But instead, the BJP suffered a huge setback proving that there is no truth in the allegations of rigging by tampering with or hacking the EVMs. It is also not just a coincidence that the clamour for returning to the paper ballot system died down after the BJP started losing state elections.

The opposition leaders are behaving like Luddites. Technology is to be embraced if it results in bettering a system. EVMs have made voting efficient and the results can also be tabulated faster. They cite examples of many developed countries that have a paper ballot system of voting. But their population is smaller than that of a single state in India. Electronic voting is the future. We can even think of allowing voting by mobile phones in the near future if a foolproof technology emerges. Instead of casting aspersions on the EVMs, the opposition leaders should suggest ways of making it stronger and believe that a malfunctioning EVM has not been hacked, it has just broken down.