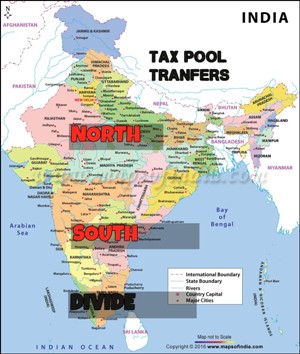 Editor-in-Chief of indiacommentary.com. Current Affairs analyst and political commentator. Writes for a number of publications. View all posts by this Author
The anger of southern states on the possibility of getting reduced funds from the tax pool on account of their reduced population is understandable. Transfers from tax pool are made as per the size of the population of the state as the sole criterion. Southern states will get less this time because the Centre is upgrading the population records for tax transfer to the figures reflected in the 2011 Census. Earlier, the 1971 Census was being followed. Between 1971 and 2011, the population of states in south India has declined.

The Central government has a population control policy that these states have followed assiduously to check population growth, along with other parameters like increased literacy and education that has helped in controlling population. Hence, they should not be punished through lower transfer from the tax pool.

In order to do this, the government must scrap the old practice of allotting funds as per the population size of the state. There is no doubt that more money is needed to feed more mouths but this acts as an incentive for not reducing the population and is harmful to the nation. Instead, a basket of parameters should be made, with each item having a weight, in order to decide which state gets how much from the tax pool.

The basket must contain the size of the state, tax collected from that state, its population and population density, the state of healthcare and education and the literacy rate, among others. Weightage must be assigned to each item as per its importance. Once states realize that good governance brings more funds, there will be healthy competition to raise the bar. States like UP and Bihar, despite rampant corruption and misgovernance, continue to corner the lions share of the tax pool just because they have not done enough to reduce their population.

Shall we continue to reward those states that have performed badly? Or shall transfers from the tax pool be more equitable?