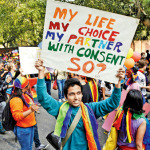 Not Legal Yet, But Mother Places Matrimonial Ad for Gay Son

Not Legal Yet, But Mother Places Matrimonial Ad for Gay Son

Editor-in-Chief of indiacommentary.com. Current Affairs analyst and political commentator. Writes for a number of publications. View all posts by this Author
It was a thing waiting to happen. Ever since the LGBT community became aware of its rights and increasingly began to assert its identity, families and friends have become supportive. Now, a Mumbai mother has gone ahead and placed a matrimonial ad seeking a groom for her gay son. 'Seeking, 25-40, well-placed, animal-loving, vegetarian groom for my son (36, 5'11), who works with an NGO. Caste no bar (Though Iyer Preferred),' the ad reads, making it the first of its kind in India. The ad was placed by Padma Iyer, mother of Harish Iyer who is a high profile LGBT activist in Mumbai. It is a huge step, but it is not legally sanctioned yet. Although a Gurgaon court had effectively recognized a same sex marriage, it was after the Delhi High Court had struck down Sec 377 of IPC as being unconstitutional in 2009 and before the Supreme Court had restored its validity in 2013. So how is Padma Iyer going to get her son married even if she finds a Ã¢â¬ËgroomÃ¢â¬â ¢ for him? It will, at best, remain a criminal union. Given the high profile Harish maintains, one is sure he will face a lot of abuse and worse from self-styled socio-religious Ã¢â¬ËguardiansÃ¢â¬â ¢ of society.

For long, parents did not heed signs of Ã¢â¬ËdeviantÃ¢â¬â ¢ sexual behavior in their children Ã¢â¬" or chose to ignore them due to the attendant social stigma. Even when they did act, they tried to get it Ã¢â¬ËcuredÃ¢â¬â ¢ medically or by counseling. When all else failed, they took recourse to babas and tantriks (even well qualified parents did this) to rid their son or daughter of the Ã¢â¬Ëevil spirits.Ã¢â¬â ¢ And the worst part was that they knowingly got them married to the opposite sex, in what they thought was a Ã¢â¬ËnormalÃ¢â¬â ¢ marriage. But that trapped both the youngsters in a situation that ruined their lives if they were not bold enough to come out of it. The matter was made worse by the involvement of religious leaders and the above mentioned Ã¢â¬ËguardiansÃ¢â¬â ¢ of society. That a law enacted by the Victorian ideals of the colonial rulers finds so many strong backers in India just goes on to show that they are largely ignorant of Indian history. Same gender sex finds mention in historical and religious texts in India and is also depicted in tableaus in Khajuraho and Ajanta-Ellora. Even the Kamasutra refers to homosexuality and says it was only the Brahmins who scorned it. It explains fellatio positions by men having pleasure without women. It is not as if this is something being imitated from Western culture.

Article 377 of the IPC, 1860 says that Ã¢â¬Åwhoever voluntarily has carnal intercourse against the order of nature with any man, woman or animal, shall be punished with imprisonment for life, or with imprisonment of either description for a term which may extend to ten years, and shall also be liable to fine. Explanation.Ã¢â¬"Penetration is sufficient to constitute the carnal intercourse necessary to the offence described in this section.Ã¢â¬Â But the operative words Ã¢â¬Åagainst the order of natureÃ¢â¬Â have not been defined, lending the section an ambiguity that can lead to it being interpreted in many ways. The government has been making a lot of noise about scrapping or suitably amending archaic laws. IPC, dating back to 1860, was an instrument of British colonialism dictated by the Puritanism prevalent in Britain then. The British have moved on since then, but India is stuck with this archaic law. The Delhi High Court had held this section unconstitutional in a landmark judgment in 2009.

But the Supreme Court, in a retrograde judgment, had recriminalized homosexuality in 2013. At that time, the court had said that given the law as it stood and the arguments put before the court left it with no other option but to restore the constitutional validity of Sec. 377 of the IPC. It also said in strong terms that it is the duty of the legislature to update laws with respect to changing social mores. The judiciary can only interpret the laws and pronounce judgments. After that, many politicians across parties made sympathetic noises but the government has done nothing to pass a law to negate that judgment. But the fact remains that there are enough such people in India who think that theirs is the normal sexual orientation and everyone else deviates. Should they live like criminals?

Should parents continue to force their sons and daughters to marry someone with a different sexual orientation just to escape social stigma? Why should homosexuality remain a social stigma in this age and time? ShouldnÃ¢â¬â ¢t the government enact a law to allow the LGBT community to live in peace and marry according to the demands of their body? These are questions that need urgent debate. But since the LGBT is a miniscule minority, no one is seriously interested in their welfare. In fact, religious heads of all religions in India are firmly united against legalizing same sex marriages. Why is it that in a country where various minorities are so famously and shamelessly appeased, the LGBT minority is being discriminated against?