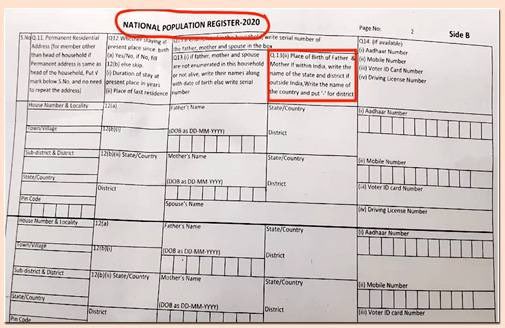 NPR Form: Disclaimer Will Not Do, Remove The Controversial Questions

NPR Form: Disclaimer Will Not Do, Remove The Controversial Questions

The government has said that the NPR forms will now carry a disclaimer that no harm will be done if a respondent does not fill in the columns asking for details of the date of birth and place of birth of one's parents. This has been decided after the BJP allies put a lot of pressure on the government and also after negative feedback was received from the grassroots. While this is fine and addresses a huge issue that led to the opposition to the NPR process, one fails to understand why the government cannot just erase the two or more columns that ask for these questions?

It is simply a matter of trust. This government, by changing the NPR questionnaire and including such questions that led a huge number of people into believing that it was designed as a first step for the allegedly more devious NRC, has lost the trust of the people in this matter. Hence, it is difficult to believe that any disclaimer will be taken on face value. There will always be a doubt in the minds of the people that leaving the columns blank will have repercussions in the future.

Home Minister Amit Shah has reportedly said that deleting the controversial questions will be problematic at this stage. While one is not sure what problems he is referring to, if it relates to the reprinting of the huge number of forms and the related costs and logistics of collecting them from various locations and then sending them back again, it needs reminding that the same will have to be done even if the disclaimer is to be printed. The best way would have been, to save the cost of paper, to run a thick black line over the controversial questions. And should we really be worried about costs when the matter is so important to a huge number of our people and especially when we have already wasted more than Rs 3000cr in Assam conducting the NRC which has led us nowhere?

Just printing a disclaimer will not prevent the enumerator from asking the said questions to the respondents. The mistrust and doubts will continue in the minds of the people if the questions remain on the forms, even with the disclaimer. Further, it will also not be proper if some respondents answer the questions while others do not as it will lead to an incomplete register. Hence, the government will do well to delete the said questions from the form and win the trust of the people. Only then should it undertake the NPR process.