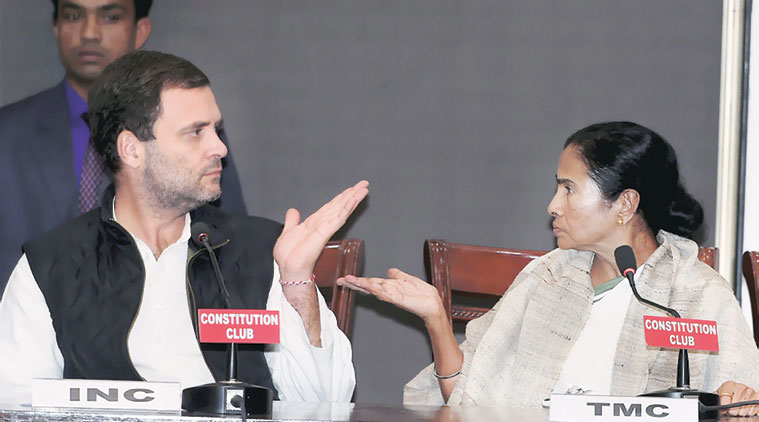 Editor-in-Chief of indiacommentary.com. Current Affairs analyst and political commentator. Writes for a number of publications. View all posts by this Author
Photo credit: Manas Ranjan Bhui

Although a lot of fireworks were provided by TMC supremo Mamata Banerjee at the press conference called by a united opposition in New Delhi to rant against demonetization and Narendra Modi, it is clear from the attendance that apart from Rahul and Mamata, no other big leader is willing to throw his hat in the ring as of now. Mamata once again repeated her charge that Modi is working like Gabbar from the iconic film Sholay to scare people. By now, one is surprised why the films producers are not asking didi for royalty for using the name of the famous character from their film. She even coined a few punch words of her own to call the Modi government faceless and baseless. Still, she continued bashing the most prominent face of a supposedly faceless government. Rahul, on the other hand, concentrated more on the failed earthquake, repeating his unsubstantiated charges against Modi based on the Sahara and Birla diaries.

With Modi having announced that further moves are in the pipeline against the corrupt, parties like SP, JD (U), CPM and NCP seem to have adopted a wait and watch policy. They also do not want to give unnecessary prominence to Rahul. Further, they are cut up as the Congress wants to run the show alone. Most parties alleged that they were not consulted and were not even told about the agenda of the meeting. That the SP chose to skip the event, despite thinking of tying up with the Congress for the UP elections, speaks a lot about how Rahul is going about getting the opposition together against Modi. His weak defence that opposition unity is a continuous process and some parties have local compulsions does not cut much ice as just a few weeks ago they were all together and raised hell in parliament. It was the unilateral move of the Congress to meet Modi alone that triggered the breakaway moves of these parties. Being the largest opposition party with pan-India infrastructure, the Congress needs to be more responsible in its dealings with smaller regional parties.

If the opposition has any intention of putting Modi in any sort of prolonged discomfort, it needs to get its act together. Wasting parliaments time and not allowing it to function is counter-productive as it harms the nation. They have to think of other ways to corner the government. For, despite the continued hardships faced by the people and the combined efforts of the opposition, the people have not risen against demonetization. If Mamata, for instance, had continued to spit such venom on any other topic, one is sure that some people in Bengal would have caused havoc. If it did not happen in the case of demonetization, then obviously there is huge disconnect between the opposition parties and the people. Hence, the opposition parties needs to reflect whether they are raising peoples concerns about demonetization or just criticizing the government because it suits them. The Opposition parties are missing a huge opportunity by digressing from the core issues.