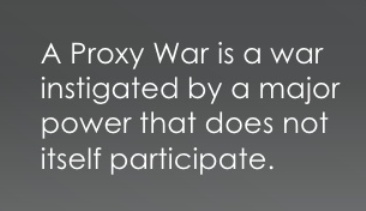 Pakistan Can Only Indulge in Proxy Wars

Pakistan Can Only Indulge in Proxy Wars

Editor-in-Chief of indiacommentary.com. Current Affairs analyst and political commentator. View all posts by this Author
People are tweeting about F-16 jets flying over Islamabad. There are reports that Pakistan is test-landing jets on highways, which its Air Force called routine training matter not related to escalating tensions with India. The stock market has crashed there. Is the country preparing for war? Is there something going on which India is missing?

Pakistan has taken an aggressive stance at the United Nations. It is another matter that no country in the world, including China, has supported it in that. US President Barack Obama, in a veiled reference to Pakistan, had asked all countries indulging in proxy wars to immediately stop doing so. Legislators in the US have moved a bill seeking to declare Pakistan as state sponsor of terrorism. Although China has asserted that its friendship with Pakistan is unbreakable, it has not condoned the Uri misadventure and has frowned upon its support to terror groups. India, Afghanistan and the US have already started discussions on how to go around Pakistans embargo on landlocked Afghanistan. This will put more pressure on Pakistan. Hence, Pakistan finds itself isolated in the world community.

Pakistans military apparatus cannot be trusted at the best of times. With tensions brewing, and with Pakistan getting isolated diplomatically, they are likely to indulge in more shadow boxing. Already top generals have been putting out statements like the country is prepared for any eventuality. There will be more drills in the days to come. Possibly, violations at the LoC will increase in number and ferocity. More infiltrators will be sent across. Sleeper modules will be activated. Already, armed men have been sighted moving about suspiciously near the Uran naval base in Maharashtra. Even though the Pakistani government might like to back-off in the current situation, the Army and the terror groups they sponsor cannot be trusted and more attacks on the lines of Uri cannot be ruled out in the near future.

India has nothing to be alarmed about. Except for preparedness of the armed forces, the highest of alerts and the readiness for a swift response to any misadventure the Pakistanis might indulge in, India needs to show all possible restraint. For, war at this juncture is not in anyones interest. An attack was carried out by Pakistan-backed terrorists at an Indian military facility. It was as much a success for Pakistani proxy war as it was a failure of Indian intelligence and security apparatus. At this moment, India should continue its efforts to isolate Pakistan over terrorism and strengthen its own counter-terrorism measures. Pakistan should be warned that another attack of the same kind will not be tolerated. Pakistanis do not have the courage to make the first overt move. Any such move will immediately make Western nations blacklist the country and the massive funding Pakistan receives from them to fight terror will not be forthcoming. Hence, its current muscle-flexing will not last long.