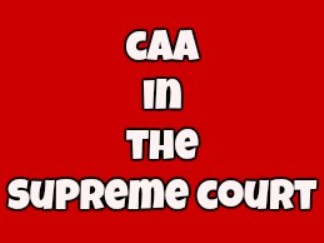 Petitions Challenging The CAA Rightly Referred To A Larger Bench

Petitions Challenging The CAA Rightly Referred To A Larger Bench

A three-judge bench of the Supreme Court has rightly referred the petitions challenging the constitutional validity of the Citizenship (Amendment) Act to a larger, five-judge bench (although one thinks that considering the number of anti-CAA petitions, the ongoing nation-wide protests against it and the importance of the matter, it would have been better if the matter was referred to a seven-judge bench, which may finally be done, like in the Sabarimala Temple case). It also rightly did not allow a stay on the CAA, saying that it cannot do so without hearing the Centre. It gave the government a four-week notice to respond to the petitions. The court also rightly said that the petitions coming from Assam would be dealt with separately as there was a different matter involved - mainly, the change in the cut-off date for citizenship which was March 24, 1971 as per the Assam Accord and was now sought to be revised to December 31, 2019 as per the CAA.

There is no doubt that the CAA needs to be examined for constitutional validity as it seeks to leave out Muslims from the class of persons who can apply for express Indian citizenship if they come from neighbouring countries like Pakistan, Bangladesh, Afghanistan and Myanmar. Since the secular nature of our democracy and the provisions of the Indian constitution expressly forbid the Centre from discriminating between citizens on the basis of religion, class, caste, gender or creed, a huge number of people, political parties and civil society organizations feel that it violates constitutional provisions. The government, on the other hand, is arguing that the amendments have been made to provide succour to oppressed minorities in the above countries. It remains to be seen how the bench interprets the provisions and which argument it finds correct.

But the apex court must come down hard on people seeking a stay on any newly-enacted Act, rule or provision that has been passed by legislatures on the first date of hearing of the case. Such a plea amounts to questioning the wisdom of the legislatures. Any stay (pending a final decision) can only be granted by a court when both parties have been heard and the court finds a prima facie case of a constitutional or legal violation. A stay order, by its very nature, is something that is granted to prevent people from being aggrieved by any law, order or rule that might be arbitrary, illegal or unconstitutional or may appear to be so. But such a situation can only arise if the court finds prima facie evidence of the same. In the case of CAA, it is a newly drafted Act that will only provide express citizenship to a certain class of refugees. It will neither take away citizenship from anyone nor will it bar anyone from applying for Indian citizenship under other laws in force. Hence, there is no question of anyone being aggrieved by it and the question of granting a stay on the first date does not arise. In the instant case, Kapil Sibal demanding a stay in the first instance amounts to fighting the political battle, which the Congress lost in Parliament, in the Supreme Court. The court rightly refused to grant it at this juncture.