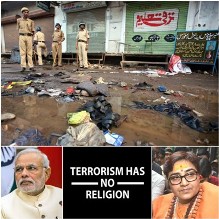 Editor-in-Chief of indiacommentary.com. Current Affairs analyst and political commentator. Writes for a number of publications. View all posts by this Author
In defending the candidature of Pragya Thakur, Prime Minister Narendra Modi has said that the Congress has no moral right to preach as some of its leaders had carried out a pogrom against the Sikhs after Indira Gandhi was assassinated. He has also given other examples to show that there is nothing wrong in people out on bail contesting the elections by saying that Congress candidates from Amethi and Rae Bareilly (meaning Rahul Gandhi and Sonia Gandhi, who are on bail in the National Herald corruption case) are also candidates who are out on bail. Finally, he said that people do not think anything when they go and hug a convict like Lalu Yadav. But do two wrongs make a right?

If the Congress leaders are accused of terror and are roaming free (with one alleged leader even making it to the top post in Madhya Pradesh), it is Congress shortcoming. Why should BJP follow the Congress? It should instead set a healthy example by not fielding any tainted candidates, especially those accused of terrorism. The same goes for those out on bail.

The Prime Minister says he is waging a war on terror. He also says that terror has no religion. But in the same breath, he accuses people of spreading lies about the so-called saffron terror. Does it mean that his government does not recognize people who create disturbances in the name of Hinduism as terrorists? What are they then? Crusaders?

Pragya has been accused of conspiracy. The incident she is accused of masterminding was nothing short of a terror attack. She should not have been made a candidate until the courts had exonerated her. Apart from opening old wounds for the family of those killed in the Malegaon blasts, her selection also sends the wrong signals. It clearly shows that despite accusing Pakistan of displaying double standards on terrorism, the NDA government is also following the same.