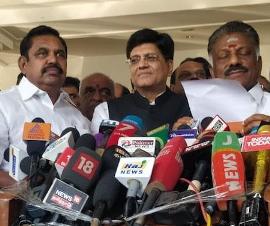 Editor-in-Chief of indiacommentary.com. Current Affairs analyst and political commentator. Writes for a number of publications. View all posts by this Author
The flurry of activity over the opposition mahagathbandhan, or mahamilavat, depending on which side of the political divide one is, has stirred the BJP into a fast-forward mode. In quick succession, the party has inked two alliances. On Monday it was the Shiv Sena in Maharashtra. On Tuesday, it was down south and the party sealed an alliance with the AIADMK and its allies in Tamil Nadu and Puducherry. The two big parties in the state generally align with one or the other of the national alliances and with DMK already in the opposition camp, the AIDMK had no other choice than to join the NDA. But since the party was sending mixed signals, the BJP did well to move fast and close the deal.

Considering that the BJP has little or no following in the state and had won just one Lok Sabha seat in 2014, Piyush Goyal, the in-charge for the state, did well to get 5 seats to fight on. The south, except Karnataka, is an area where all national parties have to tug at the coattails of the regional biggies to get a toehold. Hence, this deal is a huge one for the BJP. By fighting on only five seats, it will be able to save resources and strengthen the infrastructure in these Lok Sabha constituencies. It has to be five seats at a time for the party as it has a long way to go in the state. But it remains to be seen how the people of the state treat the AIADMK after the death of the redoubtable Jayalalitha.

But one thing is certain. The speed with which the BJP is moving to seal alliances will rattle the opposition. They are yet to iron out major differences and the review of their draft common minimum programme (CMP) is still three weeks away. Several leaders in the proposed alliance are not on the same page. The Congress, powered by recent successes in Rajasthan, Madhya Pradesh and Chhattisgarh, is acting as if it is a given that Rahul Gandhi will be the next prime minister of the country. It is reluctant to yield even an inch to smaller parties in several states  a thing which goes against coalition dharma. At this rate, the mahagathbandhan will implode even before it takes shape.