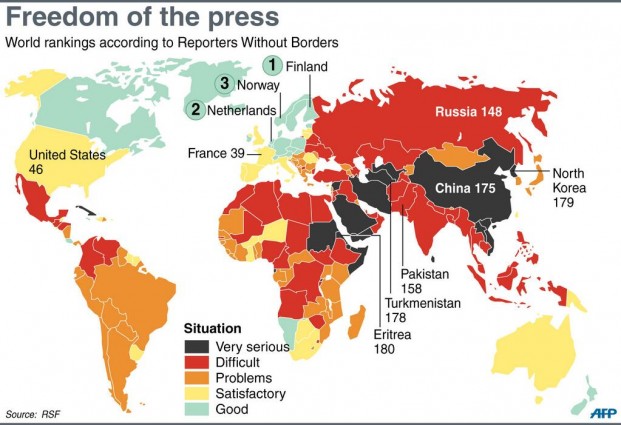 Press Freedom: Mouthing Platitudes Will Not Do

Press Freedom: Mouthing Platitudes Will Not Do

Editor-in-Chief of indiacommentary.com. Current Affairs analyst and political commentator. Writes for a number of publications. View all posts by this Author
Those who make condescending noises about freedom of press are the very ones who have ideas that will throttle free speech. There were many seminars held by various bodies when the National Press Day was celebrated on 16th November. Naturally, dignitaries like the Prime Minister and the Vice-President were invited to address the gathering and to share their views on what constituted a free press. But these dignitaries just mouth platitudes and forget that India has slipped three places down to 136 among 180 countries in the World Press Freedom Index. This is disgusting for a country that boasts of a vibrant democracy and strong institutions. If we consider the media to be the fourth pillar of democracy, how is Indian democracy vibrant if its media is not free? For all practical purposes, freedom here means freedom from state interference.

Indian media has traditionally been pliant. Since the Congress (and its allies) ruled the country for a larger part of the 70 years since Independence and it always supported the culture of cronyism, dishing out favours to those who supported it, the press played safe. It was the era of the licence-quota raj, television was not there and newsprint imports were limited. Social media was a distant dream. The press was totally pliant as the government could tighten the screws in many different ways. Those who differed  Indian Express and The Statesman, to quote just two examples  were brutally suppressed. Later, the Emergency made media a mouthpiece of the government for all practical purposes. But Indian press did not emerge stronger from the experience. Newspaper owners still cuddled up to whoever was in power, criticisms were often veiled and never crossed the line. The advent of 24X7 news channels and the social media and blogs changed all that. Still, the Indian media does not have a proper and authoritative self-regulatory mechanism in place. This emboldens both the politicians and rouge businessmen. The first type try to throttle the media and the second type get into the media business for the clout it brings.

On the National Press Day, the Prime Minister said that a free press is the cornerstone of a vibrant democracy. We are fully committed to upholding freedom of press and expression in all forms. These are very proper words. But the reality is different. Under Modi, while the government has not directly tried to suppress press freedom (except perhaps pursuing cases and conducting raids on some television channels and the Rajasthan government drafting a draconian press law that will put shackles on press freedom), politicians from the ruling BJP and the fringe elements from the parent RSS have continuously threatened journalists and have created an atmosphere of fear by branding anyone with a view different than theirs as anti-national. This restricts press freedom as those who fear for their lives cannot investigate stories and write fearlessly.

Vice-President Venkaiah Naidu, on the other hand, suggested that a regulatory body be set up to examine the working of both print and electronic media. He thinks that politicians and media representatives should discuss ways to form this body. This is not a sane suggestion as it immediately opens the media to political influence. Any kind of political influence, even oblique, destroys the freedom of the press. A newspaper might have a political view but when it has political control or ownership, then its neutrality is suspect. But people like Naidu can make these suggestions only because the Indian media has not been serious enough in regulating itself. It should immediately start the process of self-regulation by establishing a body comprising of newspapers editors, senior journalists, retired judges, senior lawyers and other eminent persons. This body should have teeth and must be able to rein in, even throw out, the bad fish in the profession. Shaming of purveyors of bad journalism can be done by instituting an award like the Razzies (Golden Raspberry Awards) for bad films. After all, if we give awards to good journalists, newspapers and channels, we must also shame those who bring a bad name to the profession. Only then will the clamour for regulation of media (control, by another name) from politicians of all hues will die down.