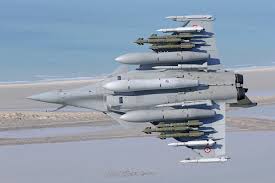 Editor-in-Chief of indiacommentary.com. Current Affairs analyst and political commentator. Writes for a number of publications. View all posts by this Author
India has acquired the much needed penetrative power for its Air Force by buying the Rafale fighter jets from France. After much haggling over pricing and detailed negotiations to ensure that Indian businesses were not left out, the government has worked out a deal which looks like a win-win situation for the country  at least on paper.

In the business angle, the government has managed to wangle an overall price reduction of 750 million Euros from the price negotiated by the previous UPA government. When one considers that delays always cause price escalation, this is no mean feat, especially since the deal has not been watered down regarding the content of the jets. Further, price escalations have been capped at 3.5 percent a year as per European Price Indices, as the last of the jets will be delivered in 66 months. Then, the 50 percent offset clause has been inserted. This will mean a bonanza for small and medium Indian businesses, which will compulsorily fabricate materials and supply as per Rafale design for routine maintenance of the jets. This will translate into a business of three billion Euros over a long term period.

On the fighting capacity and technology front, the Rafale jets will add superior penetration, where the Pakistanis had stolen a march over India after the Kargil war. While India just had a Beyond Visual Range (BVR) capacity of 50 km, which it used in the Kargil war, Pakistan had subsequently acquired the 80 km range, giving them an edge. But with Rafale, India gets the air-to-air Meteor missiles which have a BVR of 150 km. The Pakistanis know what this means.

The Rafales also come with Scalp air-to-ground missiles which have a BVR of 300 km. That means India can target deep into Pakistani territory on the western flank and some targets in China will also come within reach from the northeast. With this acquisition, Indian Air Force has nosed ahead of Pakistan and restored a sense of parity with China. This is a good, clean and transparent deal signed just in time. Any further delay would have cost the Air Force dearly in terms of relative advantage and battle preparedness.