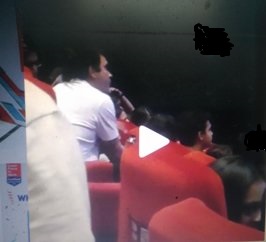 Rahul Gandhi's Day Out At The Movies

Rahul Gandhi's Day Out At The Movies

People are talking about Rahul Gandhiâs day out at the multiplex. The Gandhi scion, fresh from having formally resigned as the chief of the Congress party, took time off to see Article 15, the Ayushmaan Khurana-starrer that has been praised both by the critics and the public. He was seen enjoying the movie at PVR Chankaya in New Delhi. Gandhi also interacted with people around him and ate popcorn.

People say that this visit sans VIP trappings is something rare and Rahul should be commended for behaving like a normal person. People say that if those who call themselves peopleâs representative shy away from making private visits to places thronged by the hoi polloi, they cannot claim to have their ear to the ground. In that respect, they say, that Rahulâs visit is a path-breaking one and should encourage other leaders with puffed-up chests to come down from their self-made pedestals.

People say that it would be nice to have more politicians come to movie theatres, restaurants, picnic spots, banks and government offices to do what the common citizen does â get their work done or enjoy an outing. People say that they should bring their families at some places and leave their security guards behind. People want their leaders to be accessible and seen to lead a normal life.

But people also acknowledge that it is difficult for some to be seen so openly because of the reactions they might face in public. People are aware that not everyone is civic and politicians on an outing can, and it is very likely, face irate citizens who might throw unpleasant questions at them or subject them to abuse. That, people say, is the reason why most politicians stay away from popular spots. People say that citizens will have to respect the privacy of politicians if they wish to mingle with them. Still, people are appreciating the fact that Rahul Gandhi has made a beginning.

Picture courtesy: screengrab from a video posted by Pooja on instagram handle @mountaingirl_04