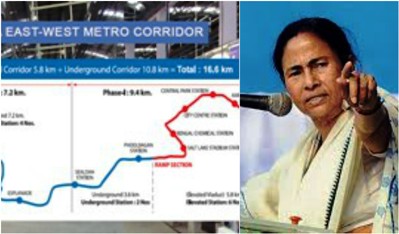 It was wrong on the part of the railway ministry not to invite West Bengal chief minister Mamata Banerjee for the inauguration of the first phase of the East-West Metro in Kolkata on February 13. Railway Minister Piyush Goyal inaugurated the much-delayed but well-made extension of the Metro in the city. Political differences and party ideology cannot be a reason for not inviting the chief minister of the state in which any Central project is being inaugurated. It goes against traditions and norms and whatever excuse is now put forward by the ministry, it was definitely a slight and a new low in Centre-state relations. It also smacked of petty politics and vindictiveness.

Mamata Banerjee has been the most vocal critic of Prime Minister Narendra Modi and the policies of the NDA government. Recently, she has upped the ante after the Centre decided to carryout nationwide NRC and got the CAA passed in parliament. After a few incidents of collecting NRC data by private agencies in the garb of Aadhar updating was detected in the state, Banerjee has accused the Centre of willfully employing Central departments such as banks and post offices to collect NRC data on the sly. She has taken out rallies against both in various parts of the state. Maybe, that was the main reason why she was not invited. But can political opposition be used against a chief minister to deny her a place on the stage at a Central function in her own state? At this rate, with the BJP losing in most states, all Central functions in states will be held without the state representatives attending. That would seriously damage the already thin federal structure in India.

But one feels that the TMC should have attended the function. Those invited should have gone there under protest and should have forcefully said in their speeches that it was Mamata Banerjee, as the then railway minister, who had started the project and provided the initial funds. They should have highlighted that by not inviting her, the railway ministry and the Centre had lowered their own status. Since the event was televised, the nation would have come to know of the Centre's folly and devious ways. By not attending the function, the TMC has played into BJP's hand and allowed it to hog all the limelight.