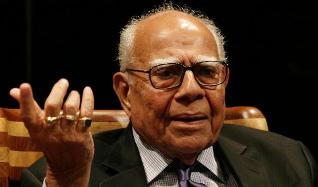 Editor-in-Chief of indiacommentary.com. Current Affairs analyst and political commentator. Writes for a number of publications. View all posts by this Author
Recently, during the hearing of a matter in Supreme Court, when the court found that Ram Jethmalani was appearing for the petitioner, the judge asked him, perhaps in jest, that when was he going to retire. Not one to shy away from a repartee, Jethmalani asked the judge whether he was asking when he will die.

People like Jethmalani have proved that age is just a number and those who hide behind their advancing years to sit at home and twiddle their thumbs are just shirkers. In his nineties now, Jethmalani has been blessed with a razor sharp brain and has defied the ageing process to remain in full control of his faculties. He seldom misses a trick in court and his performance will make many a junior look for the nearest hiding place. Alternatively, they can imbibe his habits and enrich themselves.

For some people, dying in the saddle is more than just an expression. It is true that death will come to such people the moment they stop working. Work is the elixir that keeps their heart ticking. It is also true that not everyone is so blessed.

Normally, people are incapacitated by the ageing process. Some are physically debilitated through diseases such as joint pains and acute cervical or other spondilitis that restrict their movement. Others get afflicted by Alzheimers or other diseases and are not in full control of their mental faculties.

But once in a while when one comes across a working nonagenarian, one is happy. Senior citizens have a lot to contribute to society in terms of their experience, if their condition permits.