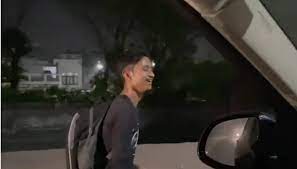 Running At Midnight: The Lad With Steely Resolve

Running At Midnight: The Lad With Steely Resolve

People are talking about Pradeep Mehra, the 19-year-old boy from Almora in Uttarakhand who aspires to join the Indian Army and works at McDonald's branch in Sector 16 in Noida. Filmmaker Vinod Kapri (who is also trending) shot the young lad running all the way home (about 10 kms) after finishing his shift at midnight and posted it on social media, making Pradeep the darling of the nation.

Kapri offered to drop the boy home but he refused saying that this was the only time that he could train for getting into the Army. People say that it shows how determined Pradeep is that he makes no excuses but works for his dreams.

People say Kapri has done a good deed by capturing the video where he first offers to drop him home and then offers to feed him but both times the lad refused. People say they are impressed by Pradeep's honesty and dedication. The simple way the lad tells Kapri that if he has dinner with him, who will cook the food for his brother and what will he eat when he comes back from after completing his night shift touched the hearts of people.

People say that this is lesson for all those privileged youngsters who think that everything should come to them on a platter. People say that the good thing about the exposure Pradeep got through the video is that a retired army general, Satish Dua, has offered to train him while others have also stepped forward to provide help.