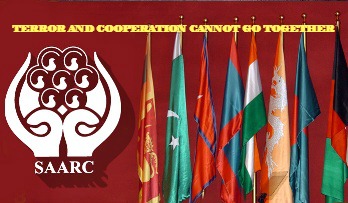 Editor-in-Chief of indiacommentary.com. Current Affairs analyst and political commentator. Writes for a number of publications. View all posts by this Author
Regional cooperation and terrorism cannot go together. If one country continues to instigate acts that are destabilizing the region, there is no use of talking cooperation. With this in mind, India has expressed its inability to attend the SAARC summit in Islamabad, Pakistan.

Following Indias cue, Bangladesh, Afghanistan and Bhutan have also withdrawn. It needs to be remembered that even if one of the eight nations that make up SAARC do not attend the summit, it stands cancelled as per the rules.

This shows that Indias efforts to isolate Pakistan in the world community are paying rich dividends. Whatever Pakistan said at the UN has few takers. Its repeated efforts to demand indisputable proof that the attackers in Uri were Pakistani (as it had done at the time of Pathankot attack too) are seen worldwide as an attempt to obfuscate matters. For, everyone knows that if a country decides to disown its own citizens and call them non-state actors, there cannot be any proof. It is common knowledge worldwide that Pakistan breeds terrorists and sends them across the LoC to target facilities and installations in India. Hence, Pakistan cannot hide behind specious excuses any longer.

Apart from India, Bangladesh too has been at the receiving end of Pakistans covert operations. Bangladesh feels that the recent spurt in terrorist attacks in the country, including killing of bloggers, are the handiwork of Pakistan based terror groups. These groups have infiltrated Bangladesh and are radicalizing the youth there. Bangladesh feels Pakistan is increasingly interfering in its internal matters.

Afghanistan, on the other hand, is miffed with Pakistan as it has chosen to apply a selective embargo on the landlocked country. In the name of fighting the Taliban, Pakistan also carries out covert operations in Afghanistan.

Given a history of conflict between the two countries, the world community did not take Indias charges about cross-border terrorism by Pakistan too seriously in the past. But now, since Bangladesh and Afghanistan are also sharing the same concerns, there will be immense pressure on Pakistan. It also helps that there is a growing bonhomie between India and the US which includes military cooperation. The US has also been doing a rethink on its South Asia policies. All this does not augur well for Pakistan.

With a rethink on the Indus Water Treaty, probable action on downgrading Pakistans most favoured nation trade status, boycott of the SAARC summit and a more than fitting reply in the UN, India is playing its cards right. PM Modis restraint diplomacy is working. India needs to be on its toes though, for an isolated Pakistan will hit back. It will hit back in the only manner it knows  covertly, by sending more terrorists to strike in India.