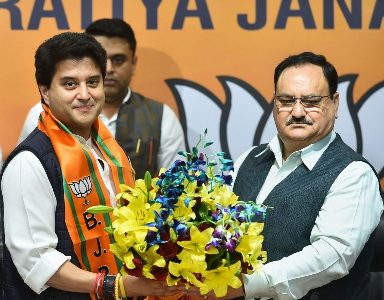 Scindia In BJP, Congress Has No Answers

Scindia In BJP, Congress Has No Answers

Jyotiraditya Scindia joined the BJP today. He was formally inducted in the party by the BJP president J P Nadda at the partyâs headquarters in Delhi. It now means that the entire Scindia family is in the BJP fold. Scindia was immediately rewarded with a Rajya Sabha nomination from his home state Madhya Pradesh. He is likely to win from there since the equation has changed as 22 MLAs supporting him have resigned from the legislature and the Congress will not have the numbers to defeat him.

Scindia said the usual things any leader of his stature changing political colours is expected to say. He said that the Congress was not the same party and that he fully supports Prime Minister Modi and his vision that is taking the country forward. Meanwhile, reacting to his charge that Rahul Gandhi chose to ignore his requests for a meeting for the last few months, Gandhi today said that Scindia was the only leader who could walk into his house anytime without permission.

The BJP is likely to induct Scindia in the Union cabinet as a minister of state with independent charge. It is also likely to assess the situation closely in Madhya Pradesh and is likely to press for a no-confidence vote against the Kamal Nath government on the day the Budget session of the assembly starts on March 16. With the Congress numbers going down after the 22 resignations, the Kamal Nath government is certain to fall. Shivraj Singh Chouhan will then return as chief minister for a fourth term. But he will have to accommodate Scindiaâs supporters, if not all then at least who were already ministers in the Congress ministry. That is likely to lead to a lot of heartburn in the state unit of the BJP.

As for the Congress, its state and Central leadership failed to gauge that support for Scindia ran deep in the party. They were perhaps fooled by the first rebellion when only 6 MLAs tried to defect and were brought back. But that was perhaps a diversionary tactic employed to keep the wily Kamal Nath under a sense of complacency. When the real crisis struck, Nath was left groping for a response. The high command was inactive as usual.

The Congress is destroying itself by not having a top leadership capable of crisis management. Scindia could have been retained had either Sonia or Rahul heard his grievances and redressed them. He is too senior a leader to be cold-shouldered in a manner that is grossly insulting. Perhaps, guided by Nath and Digvijay Singh, the high command thought Scindia was dispensable. There can be no other explanation for the manner in which the Congress handled him. Hence the party should not be surprised at how the script unfolded. There are other young leaders waiting to follow the path shown by Scindia. The Congress will have to keep its house in order instead of accusing the BJP of poaching.