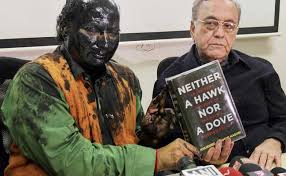 Shiv Sena Blackens Its Own Face

Shiv Sena Blackens Its Own Face

Editor-in-Chief of indiacommentary.com. Current Affairs analyst and political commentator. Writes for a number of publications. View all posts by this Author
The Shiv Sena acts as if it represents the whole of Mumbai and Maharashtra or is the sole representative of the Marathi manoos. But the fact is that a majority of Mumbaikars and even a majority of Marathi manoos do not subscribe to their kind of divisive and sectarian politics. Hence, in election after election, the Sena has never got more than 40% of the votes in BMC elections and much less in assembly and general elections. Hence it has always indulged in lumpen politics to show its strength. The preventing of a concert by Ghulam Ali and the blackening of Sudheendra Kulkarniâs face over a book launch were incidents that showed once again that the Sena will stop at nothing to make people submit to its point of view.

Thankfully, there are enough courageous and conscientious people in India who do not get cowed down by such threats. Kulkarni and the organizers deserve heartfelt applause for going forward with the launch of the book Neither a Hawk, Nor a Dove: An Insider Account of Pakistan Foreign Policy by ex-Pak Foreign Minister K M Kasuri despite the Sena threats. Kulkarni called Mumbai a tolerant city during the launch. To make a statement and to let the world know of Senaâs bullying tactics, Kulkarni chose to launch the book without removing the black ink from his face.

Organizations such as Shiv Sena know that a majority of the people are not with their brand of insanity. Their very existence as a political party depends on how they can coerce, bully, terrorize or otherwise force a large number of people into silently acquiescing with their policies and wrongdoings. They think people support them, but a terror based support vanishes at the first opportunity. The Shiv Sena will do well to follow the democratic path. It has its own daily called Saamna. If it was so perturbed by the book launch, it could have explained its position in a front page editorial in the daily. Such hooliganism has no place in a democracy where all points of views are to be respected. But the Sena has always maintained that only its own point of view matters. By blackening Kulkarniâs face the Sena has, in effect, blackened its own.