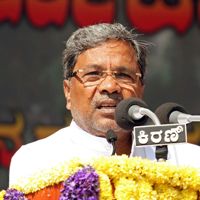 Linus tackles things head-on. He takes sides in his analysis and it fits excellently with our editorial policy. No 'maybe's' and 'allegedly' for him, only things in black and white. View all posts by this Author
It is amazing to see the post-poll demeanor of Siddaramaiah, the former chief minister of Karnataka. Before the polls, he was the boss of the state. He was given unprecedented autonomy by the Congress and Rahul Gandhi. Despite the presence of senior leaders of some repute, it was Sidda who was calling the shots, right from selection of candidates to orchestrating the campaign. He was the one who replied to PM Modis charges on social media and he was the one who took Modi on. But after the polls, he was made the sacrificial lamb as the Congress moved on to hastily offer JD(S) the CMs chair to preempt the BJP from forming the government.

Siddaramaiah is a recent recruit as he joined Congress only in 2006. But he is seen as an important cog in the Congress machinery in the state. He is adept at social engineering, though his Vokkaliga constituency deserted him this time and his Lingayat card flopped. That he was chosen as CM through a secret ballot of MLAs in 2013 was proof of his popularity in the Congress party. He completed his term and did not attract too much anti-incumbency which is apparent from the fact that despite getting lesser seats, the Congress got 38% vote share in 2018.

Ideally, the Congress should have had a pre-poll alliance with the JD(S) if it wanted to prevent the BJP from grabbing power in Karnataka. But since Deve Gowda has a grouse against Siddaramaiah and wanted him replaced, the Congress had no option. What did not happen before the polls is happening now. Siddaramaiah is being sidelined despite his not-so-bad performance. Since he has a lot of support on the ground, will he take it lying down? That is a million dollar question. Stay tuned for more drama on this front.