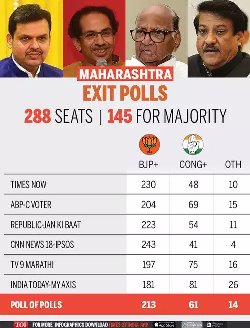 State Elections: Another Clean Sweep By The BJP?

State Elections: Another Clean Sweep By The BJP?

The poll of exit polls shows that the BJP is likely to retain power in Haryana and the BJP-Shiv Sena alliance is set to sweep Maharashtra. The numbers are extremely disconcerting for the Opposition parties as they seem to be nowhere in the picture and are once again set to wear the also-ran tag.

That the BJP has campaigned in these elections on the 'strength' of its incumbent chief ministers speaks a lot about the confidence it has in them. Normally, anti-incumbency dictates that such things are left open. On the other hand, that the Opposition parties have found no issues strong enough to drive home the anti-incumbency factor shows that either they did not do their homework well or that they have already accepted defeat.

The BJP did well to assuage the hurt feelings of the Shiv Sena in Maharashtra and sealed a good alliance much ahead of the elections. Though there were rumblings of protest in the Sena ranks in some of the constituencies, the Sena rank and file accepted the decisions of the leadership in the end. Joint campaigning by the two parties has resulted in a projected complete sweep with the alliance set to get 243 seats at best and 181 at worst, much more than the 145 required for a majority. With the BJP set to get almost 30% more seats than the Sena, Devendra Fadnavis is likely to be the chief minister for a second term, further enhancing his already growing stature within the party. The Sena might pitch for the post of deputy chief minister and will most likely get it.

In Haryana, the BJP is likely to get 66 seats against the 24 projected for the Opposition. This will also cement Manohar Lal Khattar's position. Although he has run an indifferent administration for the last 5 years, such is the disarray the Congress finds itself in that it has failed to make a dent. Although the India Today-Axis My India poll has predicted that the Congress will give a tough fight to the BJP in the state, the ground reports suggest otherwise. The BJP will, in all probability, sweep the state.

The Congress, it seems, has suffered a lot by staying headless for nearly 4 months after the general elections. Further, the party's stand on the abrogation of Article 370 has not gone down well with the voters. Also, the younger lot of leaders have obliquely supported the BJP government's moves in Kashmir, further denting the party's prospects in the state. The Opposition will have to decide on a combined strategy if it wants to stop this BJP juggernaut otherwise it will face an existential crisis.