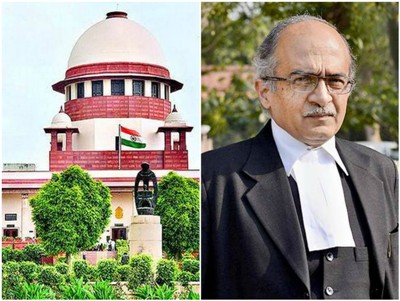 A lawyer-activist tweets negatively about some recent judicial decisions and questions the Chief Justice for sitting on a motorbike without a mask and helmet. The Supreme Court takes suo motu cognizance and charges him for contempt of court. The apex court's decision to haul up Prashant Bhushan for his tweets is not correct. Many other commentators have also been critical of the way the court has been handling several recent cases. There is no way the court can keep everyone happy with its decisions. If it is doing its job with honesty, it has no reason to be miffed with criticism for interpretation of the law is but a personal reading of the judge or judges based on the bare act and judicial precedents. Also, most daily newspapers were also critical of the Chief Justice when his picture on the motorbike first appeared.

As long as any criticism of a judgment, or judgments, does not attribute motives or cast aspersions on the judges, it should not be termed contemptuous. As different judges can interpret the same law differently, so different commentators can have their own take on judgments. The judges have to recognize this and be lenient for the reason of freedom of speech. If a narrow meaning is assigned to the contempt law it would stifle freedom of speech, the definition of which the Supreme Court has been trying to broaden in several recent judgments. The court has also not specified which of Prashant Bhushan's tweets it found to be contemptuous. A general and sweeping charge is itself bad in law.

Further, the court acted with unseemly haste in the Prashant Bhusan case. When this is juxtaposed with the delay in acting on several other cases of importance, it does not show the court in a good light. It sends the signal that while the court might take its own sweet time in other cases, it will dispense justice quickly if someone encroaches on its turf or as it said in Prashant Bhushan's case brings "the administration of justice in disrepute" or is "capable of undermining the dignity and authority of the institution".  There is no doubt that the system will collapse if motives are ascribed or aspersions are cast on those who dispense justice. But the judges need to take a broader view in the interest of freedom of speech and tolerate criticism as long as it is not mala fide.