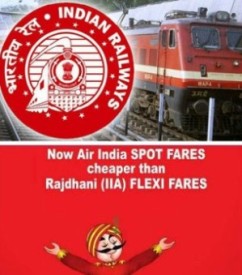 Surge Pricing by Indian Railways is Just a Gimmick

Surge Pricing by Indian Railways is Just a Gimmick

Editor-in-Chief of indiacommentary.com. Current Affairs analyst and political commentator. Writes for a number of publications. View all posts by this Author
The Indian railways have introduced surge pricing on the so-called elite trains like Rajdhani, Duronto and Shatabdi. As a tool to earn more with rising demand surge pricing cannot be faulted, but there are several pre-conditions that have to be met before it can be applied. First of all, perfect competition must exist in the market where surge pricing is applied by one of the sellers. The railways being a monopoly, this is just a backdoor method for it to increase prices. The customer has no alternative but to buy at unjust prices. Then, with the government frowning upon surge pricing by app cab operators and hinting that it will come out with a new set of rules for them, it is improper for it to use the same in its own monopolistic utility.

Further, there has to be a reasonable base for uniform pricing and meeting the usual demand before applying surge pricing. But the railways have chosen to have just 10 percent as the base for uniform pricing before applying surges at every subsequent 10 percent of sales. This is highly unjustified. Lastly, the railways have always followed surge pricing with a twist in its Tatkal ticketing scheme. Instead of introducing universal surge pricing, it could have increased the seats under Tatkal and extended the window when it could be booked. That would have satisfied most of surge pricing conditions.

The railways do not recover even half of the per-kilometre running cost of passenger traffic. Hence, the need is to revise passenger fares across the board. But successive railway ministers have played politics with railway finances by leaving them untouched. This has meant that internal revenue generation suffers as the government subsidizes rail fare. Instead of gimmicks like surge pricing, the railways should increase fares by 3 to 5 percent in the lower classes and 8 to 10 percent in luxury classes. That would bring in a lot of revenue. Also, operating costs should be trimmed by shedding flab. Railways employ far too many people than necessary. The railways have claimed that surge pricing has succeeded. But the people have a choice. Already, some of Air India spot fares work out cheaper than Rajdhani surge fares. As word spreads, will not the railways lose passengers to the airlines?