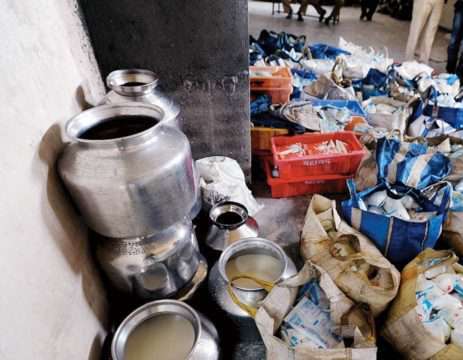 Synthetic Milk Product Sellers Are Playing With Health Of People

Synthetic Milk Product Sellers Are Playing With Health Of People

Some weeks ago, the Madhya Pradesh police had busted a gang that was manufacturing spurious (synthetic) milk and dairy products from liquid shampoo, detergent, refined oil, maltodextrin powder, sodium thiosulfate and other chemicals and preservatives. During the operation police seized around 10,000 litres of synthetic milk, more than 500 kg of adulterated condensed milk and around 200 kg of synthetic cottage cheese.  They also seized around 20 tankers and 11 pick-up vans containing spurious milk and other dairy products. The investigation revealed that adulterated milk and other products such as condensed milk and cottage cheese were supplied to Delhi, Rajasthan and UP and other states.

In the case, Swami Achyutanand Tirth & Ors versus Union of India and Ors, the Supreme Court, citing National Survey on Milk Adulteration, 2011 conducted by FSSAI, had said that Nutritional value of milk is compromised by mixing water and other harmful agents. Adulteration of milk with water is used to increase the volume of milk and brings down the nutritional value, and contaminated water in adulterated milk can cause gastroenteritis, stomach ailments, etc. Adulteration of milk with chemicals like caustic soda and detergents etc. is very serious. Prolonged consumption of milk adulterated with chemicals may affect vital body organs and may pose health risk to the infants, children and also adults. It also noted that 68.4 percent of the total milk sold in India was adulterated. It had directed both the Centre and the states to take immediate steps to check the practice. That was in 2016. But the recent discovery shows that manufacture of synthetic milk goes on unabated.

It is really sad that unscrupulous businessmen play with the health of the people, especially children, by manufacturing and selling such a vital health drink as milk. But this is not possible without the collusion of district officials. If the factories in MP were operating on such a large scale, the district authorities must have inspected them. It would have come to their notice that raw milk was not being procured. How then was the processing done? They would have also spotted the chemicals which have no place in a milk factory. All this should have made them suspicious. But either inefficiency or corruption made them partners in crime.