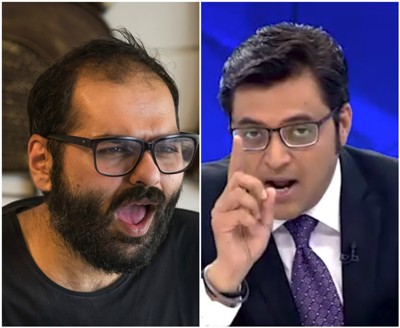 The Kamra-Goswami Episode: Too Many Wrongs

The Kamra-Goswami Episode: Too Many Wrongs

There are three distinct strands in the Kunal Kamra episode that played out mid-air on an Indigo flight. The first involves Kamra's insistence to disturb Arnab Goswami's privacy. The second is creating a ruckus on a flight, which is not permitted as per law. The third is the ban by Indigo and the subsequent 'advice' by the government to other airlines that they should ban him from flying.

Kunal Kamra's defense in seeking to disturb Goswami is weak. He says that if Goswami's channel could point the camera at unsuspecting persons and bombard them with uncomfortable questions and seek immediate answers, he too has the right to corner the journalist and seek answers from him about issues that were troubling his mind. But the major difference in this theory is that while the channel does it for the media and provides the answers to millions of viewers (although one is not convinced if media has the right to do that), Kamra was doing it purely for his own satisfaction. Thus, he had no right to invade the privacy of an individual, especially when he was asked to go away. He should have taken the no for what it meant. In any case, two wrongs do not make a right. There are many people who do not like the kind of comedy Kamra does. Would he take kindly to one of them accosting him on a flight and invading his privacy (apart from flight attendants taking selfies, which Kamra seems to love)?

Then Kamra chose the wrong place for the 'confrontation'. There are millions of Indians who do not like Goswami's brand of journalism (in fact, most do not consider it journalism at all). But as a frequent flyer, Kamra should have been aware of the fact that civil aviation rules are very strict and flyers can be booked for the smallest of misdemeanors. He says he followed the seat belt rules and moved on whenever requested by the staff. But he did not stay put at his seat, did he? He repeatedly went to where Goswami was sitting to confront him. That, according to civil aviation rules, is enough to prove misdemeanor.

Still, Indigo acted in haste by banning him from flying with them for 6 months. Then, the government acted unwisely in asking other airlines to ban him too. What Kamra did was wrong and against the rules. But he was not a habitual offender. The first offense should not have resulted in a ban. He should have been warned about his conduct and that would have ended the matter. Kamra is a professional who holds shows all over the country and abroad. By banning him from flying, the government is trying to gag him. The severity of the punishment is definitely not in proportion to the gravity of the offense.