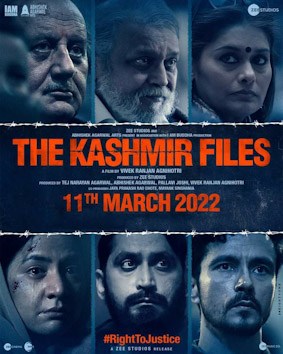 The Kashmir Files: A Brave And Eye-Opening Film

The Kashmir Files: A Brave And Eye-Opening Film

The Kashmir Files is a hard-hitting documentation of the travails of Kashmiri Pandits during the major upsurge in terrorist activity in the Kashmir Valley in 1990. It weaves the story around the family of one Kashmiri Pandit and adds a commissioner, a senior police officer, a doctor and a journalist as his friends who are mute witness to what happened to the family. The story gets a revival when a surviving member of the family, now attending a university (modeled after JNU) where he is brainwashed by a 'liberal' professor and equally brainwashed peers into supporting the cause of Kashmir's 'liberation' and hence supporting the very elements who had killed his entire family, except his grandfather and him.

When Pushkar Nath Pandit (Anupam Kher) dies after a long struggle to get justice for his community, his grandson Krishna (Darshan Kumar) goes to their ancestral home in Kashmir to sprinkle his ashes there as per his last wish. As Pushkar Nath had asked him to take along four of his friends from that era, Krishan first goes to the house of Brahm Dutt (Mithun Chakravarty) and meets DGP Hari Narian (Puneet Issar), journalist Vishnu Ram (Atul Srivastava) and Doctor Mahesh Kumar (Prakash Belawadi). These friends had decided that they will not tell the truth of 1990 to Krishna. But when they find him radicalized by liberals and supporting the same elements that killed his family, they tell him the truth. But he is still skeptical and goes to meet the 'contact' Professor Radhika Menon (Pallavi Joshi) had asked him to meet. There, unknowingly, he comes face-to-face killer Bitta (Chinmay Mandlekar) who feeds him a false narrative, once again brainwashing him into accepting that it is the killers who are oppressed. When he goes back to Brahm Dutt's house and spews venom on the administration for being against the people of Kashmir, Dutt can hold back no more and gives him the Kashmir Files where he has carefully kept all the newspaper cuttings of the killings of Kashmiri Pandits and army jawans that took place then and how Bitta was involved in all those crimes. Krishna finally gets to know the whole truth and decides to build his own true narrative. He goes back to the university and tells the truth before the whole world. There are students who try to make fun of him and stop him, but his forceful narration finds others who are willing to listen to him. Krishna is finally at peace with himself.

This is a fictionalized version of true events and hence cinematic liberties have been taken by director Vivek Agnihorti. But the sum of the effort makes for a very disturbing film. The brutality of the terrorists, culminating in the mass grave of 24 Pandits, is chilling. The way the administration washed its hands off the entire episode, the media chose to ignore it and fed false narratives, how policemen were rendered impotent by terror threats and doctors were not allowed to treat the community at gunpoint showed how the Pandits were forced to flee their homeland and become refugees in their own country. The scene where Commissioner Brahm Dutt and DGP Hari Narain go to the house of the state chief minister to ask him to do something for the Pandits and find that terrorist Bitta is waiting there is excellent. It clearly explains the complicity of the state. The way Mithun Chakravarty looks at the gun in the holster of Puneet Issar as if given a chance he would shoot Bitta there and then was quite well done. But their hands were tied.

The acting is top notch. Anupam Kher is outstanding as Pushkar Nath Pandit and carries the fight to Delhi even as he is inflicted with dementia. Mithun Chakravarty rightly portrays the helplessness of officers when the political class is not interested. Pallavi Joshi is brilliant as the scheming professor out to brainwash young minds. The underlying message of the terrorists - reliev, geliev, seliev or convert, die or flee - is brilliantly used throughout the movie. This is a brave film which must be seen to know the truth about the genocide of Kashmiri Pandits in the valley in 1990 and the way the administration abandoned them.