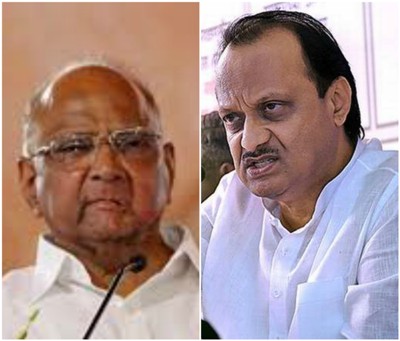 The Maharashtra Imbroglio: Getting Curiouser And Curiouser

The Maharashtra Imbroglio: Getting Curiouser And Curiouser

The Maharashtra situation is becoming curiouser and curiouser with each passing hour. At the centre of the confusion are the NCP and Sharad Pawar. Although the party and its supremo claim that Ajit Pawar acted out of his own accord and did not give any indication of his 'defection' to Sharad Pawar, they have not yet taken any action against him apart from removing him as the leader of the legislative party in the assembly. He has neither been issued a show-cause notice nor has he been suspended from the party for taking oath as the deputy chief minister in the Devendra Fadnavis government. There have been efforts to make him come around and disown the pact he entered into with the BJP.

Ajit Pawar, on his part, kept quiet the whole day tomorrow despite the heated political atmosphere in the state. When all political leaders of all parties were busy trying to keep their flock together, Ajit Pawar was spotted sitting alone at home and talking with people on a mobile phone (it was not the normal phone he uses which was kept switched off for the better part of the day). What does this mean? Pawar had joined the government with 10 MLAs in tow. Why was he not trying to keep them with him? Why was he not trying to get other MLAs and move them to a safe place (like the other parties were doing) where the NCP could not contact them? Is he either too sure of something or has he already decided that he will not be able to muster the numbers?

When Sharad Pawar and the NCP were contacting all MLAs and calling them for a meeting in Mumbai, Ajit was not doing anything concrete. So is the NCP staging a drama for public consumption while it is hand in gloves with Ajit Pawar and the BJP? Or has Ajit Pawar already conceded defeat? Going by the attendance at the meeting organized by Sharad Pawar, Ajit's plan seems to have flopped. Then why are he and the BJP so cocksure of proving their majority in the house? Is there an underhand deal that the others are not able to see?

Ajit Pawar later professed loyalty to Sharad Pawar and said that the NCP and the BJP would provide a stable government in Maharashtra. That again gave the impression that what he had done had Sharad Pawar's backing. The latter immediately refuted his charges by saying that what Ajit was claiming was untrue and misleading and the NCP has no alliance with the BJP. But as long as the NCP does not take any strict action (like removing him from the party for gross indiscipline), the whispers that he is just a front for another grand plan of Sharad Pawar will continue to get louder.

Ultimately, it will be the floor test that will prove the strength of the respective blocks. The Supreme Court has provided the BJP-Ajit Pawar alliance a breather by not ordering an immediate floor test. But one feels that since the negotiations between the Shiv Sena, the NCP and the Congress were going on for over a week and were in the final stages, as also the fact that Sharad Pawar still holds sway over a majority of the MLAs in the NCP (as proved by the attendance at his meeting where even some of those who had attended the swearing-in in the morning were also present), it will be very difficult for the government which was sworn-in in a hurry and with a cloak of secrecy to cobble up the numbers.

It seems Ajit Pawar misjudged the situation and the BJP just went along to prevent the Sena-NCP-Congress alliance from staking a claim, hoping to get the MLAs with the lure of ministerships (reports are already pouring in where NCP MLAs are claiming that they are being offered the same if they join the alliance) or more. But if Sharad Pawar is firm on not joining, it will be a herculean task for the BJP or Ajit Pawar to get the necessary numbers. They might be able to snare a few MLAs but that will be about all and it will not keep them afloat. It will be highly embarrassing for the BJP if the government falls in a few days and the Shiv Sena, the NCP and the Congress are bent of doing that.