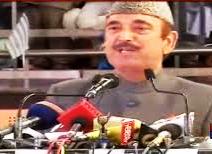 Editor-in-Chief of indiacommentary.com. Current Affairs analyst and political commentator. Writes for a number of publications. View all posts by this Author
Are there any similarities between the RSS and the ISIS? Not by a long shot, no. Then why did senior Congress leader Ghulam Nabi Azaad compare the two. Despite his denial, this is what he actually said â âwe hate the ISIS as much as we hate the RSS.â If this is not comparison, then what is? It presupposes that the two organizations have ideology that is similar enough for both to be the object of hatred. Azad distributed the CDâs of his speech in the Rajya Sabha to prove that he did not compare the two. I do not know what the honourable members of the august house made of it, but it is clear that Azad was saying that the ISIS was to be hated and the RSS was to be equally hated as it was like the ISIS.

And who, pray, constitutes the âhumâ (we) Azad so pompously used throughout his speech. As he is a Congress leader, are we to assume that the âweâ in his speech meant the Congress party? Or as he is a Muslim, did he mean Muslims? Again, as he is Kashmiri, did he mean Kashmiris?

It should be noted that the major difference between the RSS and the ISIS is that while the latter believes in Pan-Islamism, or the hegemony of Islam in a world without boundaries, the RSS believes in the hegemony of Hindu nationalism which according to them should be the guiding principle of governance in a Hindu majority nation like India. While the ISIS believes in armed struggle across nations to subjugate national governments and erase national boundaries to enforce Islamic hegemony, the RSS has no such grandiose plans for Hinduism. The similarity between the two is that neither all Muslims subscribe to ISIS views nor all Hindus are RSS cardholders. The two organizations represent extreme views with the difference being that while the ISIS tries to convert people to its way of thinking by force, the RSS does not do this. Hence, the two cannot be compared.