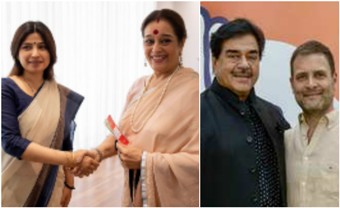 The Sinhas: Has The Better Half Joined A Better Party?

The Sinhas: Has The Better Half Joined A Better Party?

Holding an extreme view and carting the ball out of the park is what interests him most. He is a hard hitter at all times. Fasten your seatbelts and read. View all posts by this Author
For some families, it is now becoming a question of covering all bases. Even as Shatrughan Sinha left the BJP to join the Congress, his wife Poonam has now joined the Samajwadi Party. She will be contesting the Lok Sabha elections against Rajnath Singh from Lucknow.

But was there a need to join a different party to fulfill political ambitions? As her name was announced, the Congress immediately said it will not field a candidate and support Sinha. But couldnt it have been done the other way round? Couldnt Shatrughan Sinha use his immense clout with the opposition to make the SP-BSP-RJD alliance agree to leave the seat for Poonam Sinha as a Congress candidate? It would have looked much better if both the Sinhas were in the same party and fighting for the same ideology. Now, apart from a common hatred for Narendra Modi, Mr Sinhas party has no affinity to Mrs Sinhas. In fact, the leader of one of the alliances partners is on record as having asked the Muslims not to vote for the Congress. Will Mayawati now relent and take back her words where Mrs Sinha is concerned?

It is only hypocrisy and lust for power that makes husband and wife choose different parties. The wife is the husbands better half. So does it mean Samajwadi Party is better than the Congress? Why didnt Shatrughan join it then? Maybe the Congress said that it would not look proper if a recent entrant and his wife both were given important constituencies to contest from. Maybe the Congress said that there would be a revolt in the ranks. In short, maybe the Congress denied Poonam Sinha a ticket to contest. On the other hand, maybe Dimple Yadav was making persistent overtures. How could Mrs Sinha pass the opportunity of serving the nation? Party and ideology are trifling things which should never prevent a person from serving the nation. When the time comes, the best offer should be accepted. After all, the nation comes first.

And these unprincipled people claim Modi is destroying the nation!