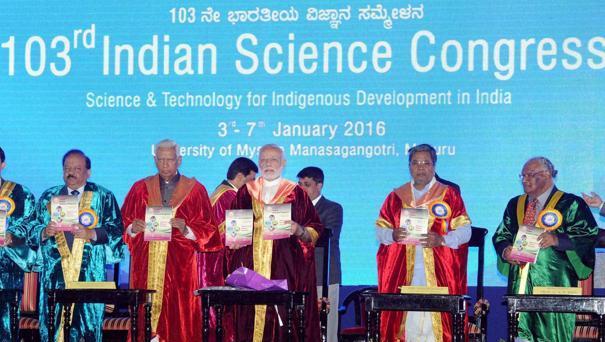 Editor-in-Chief of indiacommentary.com. Current Affairs analyst and political commentator. Writes for a number of publications. View all posts by this Author
Recently, the 2016 Indian Science Congress was held. Were any useful or serious discussions held in it or was it just another network-building and back-slapping jamboree? In countries where science, research and development occupy a pride of place in society, such events see a rush of scholarly papers being submitted and people vying to speak in order to gain recognition, for themselves and their painstakingly conducted research. But in India the Science Congress has been turned into a circus, as Nobel laureate Venkatraman Ramakrishnan rightly lamented.

When was the last path breaking discovery or invention made by Indian scientists working in India? As a nation we wallow in mediocrity as far as scientific matters are concerned. We care a hoot about patents of people who invested fortunes and lifetimes in creating something new. We change the âprocessâ to change the âproductâ and dish out our own versions, self-congratulating ourselves on our âsuccessâ and the fact that we can produce the same things at a much cheaper cost. But in the process we have first lost the will to discover â and hence innovate â and then become complacent. We know others will do the research and we will just copy. So the will to excel in science has gone out of our DNA.

More dangerously, we have increasingly begun to equate science with mythology. If Ram came to Ayodhya in a vaayu vaan, there are takers for the theory that airplanes are an Indian invention. The habit of explaining things through the occult is deeply ingrained in the Indian psyche. Mythology is increasingly being detached from religious beliefs and made to appear scientific. Everything that happens is usually considered an act of God. Scientific explanations are neither given nor sought. Children are not encouraged to be inquisitive about the unexplained (in fact, they are scolded by parents and teachers both, if they are persistent).

If this continues, there will be lesser innovation with passage of time. Scientific temper has to be built from childhood. The government has to invest in science laboratories in schools at the lower level and research at the higher levels of the education institutions. It is surprising that a stream of study that can fire the imagination of kids and make them ask million questions and conduct billions of experiments is reduced to just a subject in textbooks. India needs to inculcate the scientific spirit in its youth if it has any pretensions of being a manufacturing powerhouse. Borrowed technology, designed for other countries and cultures, can take us only thus far and no further. We need scientists who can make technological inventions according to our needs. For that, we need scientists who invest time in research and experiment, not those who try to pass off mythology as science.