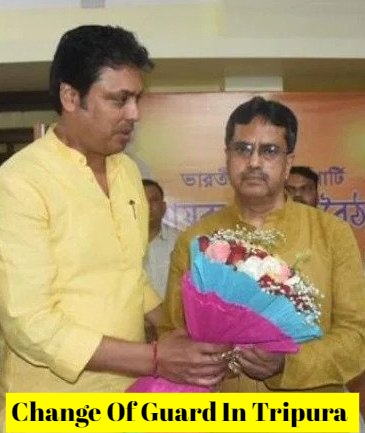 Given the differences in the state unit, it was a given that, as per BJP's recent policy of replacing chief ministers before state elections, Tripura chief minister Biplab Deb would be replaced. But the suddenness of the decision, without any political buzz in Agartala or Delhi, was surprising. Deb submitted his resignation to state governor S N Arya soon after returning from Delhi where he met Home Minister Amit Shah and other senior leaders. Many BJP leaders in Tripura were disgruntled with him and some had even quit the party and joined the Congress. Deb had lost popularity in the party in the last two years and central leadership could not risk contesting the 2023 elections under his leadership.

In a swift decision, state BJP president Dr Manik Saha (he is a dentist by profession) was 'elected' the next chief minister. Dr Saha was elected to the Rajya Sabha just last month. But there reportedly was a lot of drama in the closed door meeting where central observers Bhupendra Yadav and Vinod Tawde were present. Videos have surfaced showing the unruly behavior of minister Ram Prasad Paul who protested when Dr Manik Saha's name was announced as he favoured Jishu Dev Varma, a member of the erstwhile royal family of Tripura. Paul is reported to have broken several chairs before he was brought under control. Outgoing chief minister Biplab Deb proposed Dr Saha's name and except for Paul, it was accepted by all legislators.

Deb tried to put up a brave front as he said that the central leadership wanted him to take charge of the state unit before the 2023 elections. But it is clear that the internal rumblings in the state unit and the fact that a majority of the MLAs had turned against Deb meant that the central leadership had to take action. Like in Gujarat, the party though it wise to effect a change instead of allowing disgruntled MLAs cause irreparable harm. But it seems that Deb had his way with the central leadership as Dr Saha is his close associate ever since he joined the party in 2016. It remains to be seen that how Deb takes his 'demotion' and how he helps the party and the new chief minister Dr Manik Saha in the 12 months that remain before elections are held.