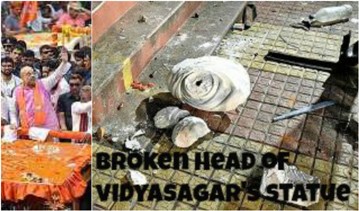 Editor-in-Chief of indiacommentary.com. Current Affairs analyst and political commentator. Writes for a number of publications. View all posts by this Author
The violence during Amit Shahs roadshow in central Kolkata was a direct result of the two-way rivalry being witnessed in Bengal. On the one hand, the TMC is fiercely resisting the steady inroads the BJP is making in the state by cornering workers and vote share of the CPM while on the other, the CPM and other left parties are resisting the BJPs attempts to influence their workers and voters.

It is very difficult to pinpoint who instigated the violence. While some reports pin the blame on the rowdy BJP workers  with one report, quoting witnesses, even said that Amit Shah himself egged them on  other reports say students and others having nothing to do with the roadshow or the BJP were instrumental in starting the fight. The BJP has blamed the TMC for starting the violence while the TMC has said that goons from outside the state started it when students protested against Amit Shah.

But whatever happened was sad and it was after a long time that the university area of College Street which houses the Calcutta University's main campus along with other colleges witnessed such scenes. Particularly shocking was the damage done to the bust of Ishwar Chandra Vidyasagar inside the Vidyasagar College. Eyewitnesses claimed that BJP workers shouted that Vidyasagars days are gone before breaking the bust. But the BJP has said that the fracas inside the college was engineered by TMC goons.

The BJP will have to realize that Bengal is different. Hindus in Bengal hold their icons in very high esteem. Ishwar Chandra Vidyasagar was an educationist and reformer and did pioneering work in the field of education and womens empowerment. He is one of the best-loved icons in the state. If BJP workers are indifferent to such sentiments, Amit Shahs hope of consolidating Hindu votes in the state will never materialize.

Any party that has no charismatic local leader, little or no infrastructure and till now, low vote share will always face resistance when it tries to spread its wing in any state. But that does not mean that its workers will insult local icons or indulge in violence. Whatever the provocation, given that the party president was leading the show, BJP workers should have exhibited restraint. They would have won a lot of brownie points for that. But ahead of the polls in the city on May 19, their action is likely to harm the party.