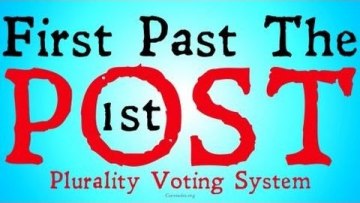 By our team of in-house writers. View all posts by this Author
Does vote share matter in first past the post system? Of course it is a barometer of popular support, but given the system India follows, it is quite deceptive and any analysis based on it does not always reflect the true mood of the people.

Take Karnataka for instance. Despite getting lesser seats than the BJP, the Congress got 38% of the popular votes while the BJP got just 36.2% and the JD(S) 18.3%. These figures can be put out to say that the Congress has greater support of the people than the BJP. This might not be entirely true. The reason is that support for the Congress might be limited to the seats where it won. It might have won those seats with a huge margin while the BJP might not have got votes there. That will skew the overall vote share in favour of the Congress. But across the state that might not be the case.

Further, when people talk about combining the vote shares of the Congress and the JD(S) to legitimize their post-poll alliance in saying that they got more than 54.5% of the popular votes, they forget that each party got the vote against the other. Hence, these votes cannot be combined to reflect public mood. Since the two did not have a pre-poll alliance, when the people voted for the Congress, they obviously voted against the JD(S) and vice versa. The coming together of these two parties to form the government does not reflect the public mandate.

The public mandate in Karnataka was definitely against the Congress. It was also not in favour of the JD(S) and it was certainly not in favour of these two parties combined. Taking the vote share and putting forward convoluted logic is not going to make a thing right when it is basically wrong. But such are the compulsions of democracy and the first past the post system that the BJP fell short and these two are combining to form the government. The least one can say is, good luck to them. The people of Karnataka want and deserve a stable government.