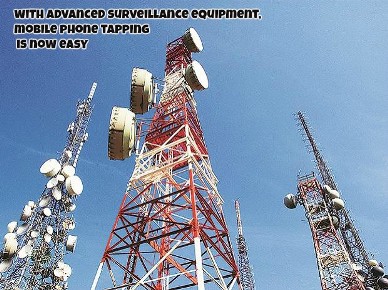 Did the Rajasthan government illegally tap the phone of BJP leaders and most probably of Congress MLAs close to Sachin Pilot? BJP spokesman Sambit Patra raised these questions at a press conference today. He also raised questions on the authenticity of the audio clips and charged the Ashok Gehlot government of not following the rules laid down for phone tapping. The party has demanded a CBI probe into the matter.

The Congress had yesterday read out what it alleged were transcripts of the said audiotapes without actually playing them at a press conference in Jaipur. In any case, permission needs to be taken from the state home secretary before putting any phone under surveillance or recording the conversation or other data like SMS messages. The Congress did not specify how it got the said audio clips. Did the Gehlot government follow the rules or did it tap the phones illegally? That is the big question.

But all governments, whether of the BJP or the Congress or the regional parties, are guilty of illegally tapping phones of political leaders. The modus operandi is the same. No written orders are issued. Operators are ordered verbally, bullied or threatened into doing the needful. Since it is done for gathering information, no trace is left after the work is done. There are advanced devices that can tap mobile phone conversations without involving the operator. It is being done in all states at all times. Sometimes it is exposed and at most other times it is not.

Governments are unconcerned about the legality because if anything incriminating is recorded and needs to be produced in the court as evidence it can be done due to several case laws on the subject. While the most cited case in this regard is R M Malkani versus State of Maharashtra, there are other cases where illegally obtained telephone recordings were admitted as corroborative evidence. And which government in India is ever concerned about the morality or the bad publicity it receives due to the covert act of phone tapping?