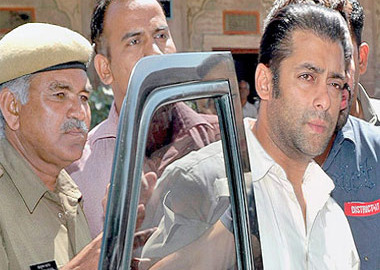 What the People Say on the Streets in Salman Khan Case

What the People Say on the Streets in Salman Khan Case

Editor-in-Chief of indiacommentary.com. Current Affairs analyst and political commentator. Writes for a number of publications. View all posts by this Author
Two main points have to be considered before making any comment on Salman KhanÃ¢â¬â ¢s conviction and sentencing in the Sessions court and its subsequent suspension by the Bombay High Court:-

1. Did the Sessions court follow all procedures correctly and examine all evidence properly before convicting and sentencing the actor?

2. Did the Bombay High Court show undue haste in admitting SalmanÃ¢â¬â ¢s appeal and was it right in suspending the sentence?

The streets are buzzing with people alleging that this is how it goes when a celebrity or a paise walah is involved in a high profile case. I asked one person what he meant by Ã¢â¬Åthis is how it goes.Ã¢â¬Â He said that even if the accused is sentenced, he manages to hire hotshot lawyers who pick holes in the lower court judgment and get him relief from higher courts. I tried to argue with him that a rich manÃ¢â¬â ¢s son (Alistair Periera) was convicted by the Supreme Court in a similar case and is now in jail, but he was not convinced. He strongly believed that Salman Khan will never serve a jail sentence for his alleged crime. There was no point asking him whether he knew the difference between rash driving and culpable homicide because he had made up his mind that Salman needed to be punished and he was not bothered under which section.

But that is not the way the courtÃ¢â¬â ¢s function. In its considered opinion, the Sessions court had found Salman Khan guilty of all charges. The Judge was clear that the actor was driving under the influence of alcohol and compounded the crime by not possessing a license to drive a vehicle. He found it to be culpable homicide and not rash driving. Although one person had died in SalmanÃ¢â¬â ¢s case (7 people had died in Alistair PereiraÃ¢â¬â ¢s case and he was given 6 months sentence by the Sessions judge), the judge chose to sentence him to 5 years in prison. That could be ascribed to judicial discretion. But what was wrong in the sentencing was that bypassing Supreme Court advice that clearly says that lower courts must not convict and sentence the accused on the same day, the Sessions judge did so. The rationale behind the Supreme Court advice is that time should be given to defence lawyers to plead their clientÃ¢â¬â ¢s case for lenient sentencing. Then there were several loose ends that the lower court did not tie up before pronouncing that the actor was guilty on all counts. All these were brought up in Bombay High Court.

But was the High Court right in admitting the appeal within two days? The court said Ã¢â¬Åwe cannot take pleasure in seeing someone inside (jail) while his rights are being decided.Ã¢â¬Â But there are millions of litigants who do spend considerable time in prison before their appeals are heard. So why was an exception made in the case of Salman Khan? KhanÃ¢â¬â ¢s lawyers had filed the appeal on urgent basis. The urgency was all theirs as the Courts were to be closed for summer vacations soon. But there was no urgency on the part of the Court, other than the fact that this was a high profile case involving a celebrity. If the case could meander in the lower courts for 13 years, a few months in jail for the accused would have done no harm. The court admitted the appeal on the basis of the holes picked by SalmanÃ¢â¬â ¢s lawyers in the lower court judgment which is good, but the undue haste it showed and the suspension it granted does reinforce the street view that the rich and powerful can play with the law.