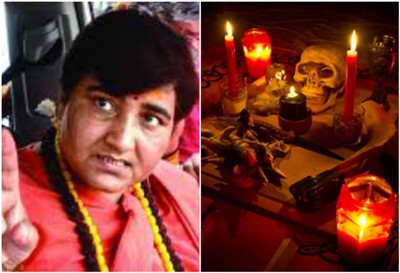 The BJP made a huge mistake in inducting Pragya Thakur in the party and letting her contest the elections and become an MP. Thakur is given to making ludicrous statements that have no relevance in the "new" India that is being put in place by Prime Minister Modi. This new India is going to be created on the back of science and technology, including information technology (as evinced by the space missions and the push for digital payments and digitization), growth of the economy and fulfilling the aspirations of a new generation whose priorities are different.

But Pragya's statements show that she still lives in an age when black magic, superstition and illogical beliefs held sway. Earlier too, she had said that Mumbai police encounter specialist Hemant Karkare had died because she had cursed him to death for torturing her in prison after her arrest in the Malegaon blasts case. If she has the power to curse, she obviously also has the power to deflect the curse inflicted on her party. Then if she knew that the opposition was using "marak shakti" to eliminate BJP leaders like Sushma Swaraj, Arun Jaitley and Manohar Parrikar, why didn't she take remedial measures to stop it? Really, this is turning into an obnoxious thing and must be stopped.

Pragya Thakur represents everything that the youth of India does not want. Apart from being a regressive Hindu, she is haughty and misbehaves with her constituents as was evident when she curtly told a person that she was not elected to the Parliament to clean toilets. Her latest remarks came after the party had directed her not to make outlandish statements. Now the party should take immediate action and gag her. She is doing irreparable harm to the party's image. People like Pragya Thakur can seem like an asset as they appeal to the hardliners but the majority of Hindus do not subscribe to her views and in that sense, she will turn out to be a liability.