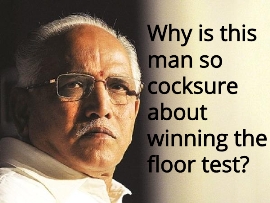 Why Is BSY Gung-Ho About The Floor Test ?Have Deals Already Been Struck?

Why Is BSY Gung-Ho About The Floor Test ?Have Deals Already Been Struck?

Editor-in-Chief of indiacommentary.com. Current Affairs analyst and political commentator. Writes for a number of publications. View all posts by this Author
Why are BS Yeddyurappa and the BJP so cocksure of winning the floor test in the Karnataka assembly today? On the other hand, why is the Congress-JD(S) combine not as happy at having cornered the BJP as it should be? Have deals already been struck between the BJP and some MLAs of the opposition combine? Given the situation before the polls, this could well be the case.

Since it was clear to all parties that a hung assembly was likely to be returned, each party must have devised its own strategy for the situation. The Congress had opened lines of communication with the JD(S) before polling day. It had a Plan B that professed support to JD(S) to form the government and keep the BJP out if it failed to get a majority. It even had a Plan C that provided for unconditional support to JD(S) with Kumaraswamy as chief minister.

As for the BJP, when its feelers to JD(S) did not elicit a positive response before the polls, the party must have done its maths and must have approached individual candidates of both the Congress and the JD(S) with offers to support it in such an eventuality. It is certain that some deals have been struck for that must be the only reason why BSY is so gung-ho about the situation.

The floor test in the assembly is likely to provide fireworks and drama with allegations and counter-allegations flying thick and fast. It is also certain that there will be a slew of court cases whichever way the vote goes. Situations like this and the ones before in Goa, Manipur and Meghalaya prompt one to think that maybe the time has come to take a hard look at the first past the post system of election and devise a tie breaker in case of a hung verdict, maybe by introducing a second preference vote.