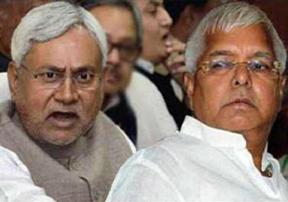 Will the Mahagathbandhan Break?

Will the Mahagathbandhan Break?

Editor-in-Chief of indiacommentary.com. Current Affairs analyst and political commentator. View all posts by this Author
Lalu Prasad and family are in deep trouble, both personally and politically. Politically, they are set to lose the perks of office as Nitish Kumar has put them on notice for various corruption charges. Nitish has been emboldened to take this step, despite being the junior partner in the alliance, for two big reasons. First, the BJP has assured him of outside support in case he has to break the alliance with RJD. Second, he wants to preserve his corruption-free image by not being seen as protecting the Lalu clan. If he can carry this out, it will have huge implication for the so-called second front (with the Congress having been decimated, the third front has become passé and the Congress is now part of the second front) and opposition unity.

If RJD is forced to leave the mahagathbandhan in Bihar and if Nitish chooses to take outside support from BJP, the Congress will also leave the alliance. That effectively would mean that Nitish will not be counted as an ally by any of the opposition parties. As it is, Nitish and Mamata do not see eye to eye. Hence, for all practical purposes, JD (U) would become a NDA ally. Nitish must calculate the pros and cons of such a move before seeking BJP support to remain in government.

For the BJP, it would be a win-win situation all the way. Amit Shah is still smarting from the effect of the drubbing at the hands of the mahagathbandhan in Bihar. Although he managed to prove that it was a one-off event by turning the tables in UP, Shah is a man who neither forgets nor forgives. If the alliance in Bihar breaks, Shah would be the happiest man in India. But the BJP will not stand to gain much if it does not join the government, which seems a remote possibility at this moment.

Further, the RJD potential of creating mischief in the state is huge, especially after their good showing during the elections. The party has musclemen and support among the yadavs. Hence, if Nitish chooses to break the alliance, he must be prepared to face major law and order problems in the state. These problems will escalate to unmanageable levels if the Central agencies arrest any member of the Lalu clan.