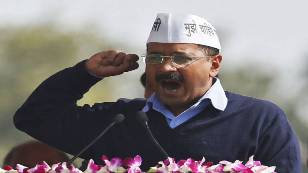 Will The New Lok Sabha Not Have A Single AAP MP?

Will The New Lok Sabha Not Have A Single AAP MP?

Editor-in-Chief of indiacommentary.com. Current Affairs analyst and political commentator. Writes for a number of publications. View all posts by this Author
Is Aam Aadmi Party (AAP) going to be totally ousted from the next Lok Sabha? Early trends point to this and that is the main reason why a megalomaniac like Arvind Kejriwal has suddenly become as accommodative as to keep after the Congress for an alliance in Delhi, Haryana, Chandigarh and Punjab. He has said that he is willing to forget the past and strike a deal with the Congress. It now comes to light that behind this uncharacteristic posture was the realization that the party is going to draw a blank in the 2019 Lok Sabha elections.

AAP had won 4 Lok Sabha seats in 2014, all of them from Punjab. But this time its Punjab unit is in shambles and it is unlikely to win even a single seat from there. In Delhi-NCR too, where it runs the government, the BJP is likely to get all seven seats. The party is also not likely to be successful in Chandigarh and Haryana. It does not have any influence in any other state. Kejriwal and AAP volunteers used to wear caps saying mujhe chahiye azaadi or I want freedom. Their wish will be granted. The people will free them from Lok Sabha duties on May 23.

The shrewd operator that he is, Kejriwal realized that it would be disastrous for the party not to have a single MP in Lok Sabha. He calculated that the best way to get at least a few seats would be to ally with the Congress. But he forgot that he had said some very disgusting things about the party and Rahul Gandhi in the past (which were reciprocated by the Congress) and that there was a great deal of hostility between Congress Delhi unit and AAP. The deal is yet to materialize and will not. In Punjab, the Congress is now the master of all it surveys and it does not need AAP to consolidate its position.

Actually, AAP has to bargain from a position of weakness and the Congress knows this. Hence, the party is unlikely to give it more than one seat each in Delhi and Haryana. That would not be acceptable to AAP. It seems the Congress is taking a devious delight in AAPs predicament and rubbing it in totally and brutally. As both parties continue to indulge in playacting about an impending alliance, the world knows that they are not going to join hands.

On May 23, if the results show that AAP has indeed drawn a blank, Kejriwals follies would have driven the first nail into the coffin of a brave experiment that could have changed the political landscape of India. A party that wanted to be different could not be so just because of one man. He learned all the dirty tricks of all other parties very fast and forgot equally fast what he had set out to do. Kejriwals failure would be sad because it will prevent other good men from entering politics. But he has none other than himself to blame.