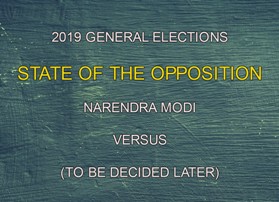 Will The United Front Without A Face Win Against Modi?

Will The United Front Without A Face Win Against Modi?

Editor-in-Chief of indiacommentary.com. Current Affairs analyst and political commentator. View all posts by this Author
The Opposition parties have taken the easy way out of the leadership issue. After hectic parleys involving the chief mover and shaker, West Bengal chief minister Mamata Banerjee of the Trinamool Congress, and other opposition leaders, mainly Sonia and Rahul Gandhi of the Congress, it has been decided that they will focus on defeating the BJP first and keep the leadership issue pending. But it may backfire as fighting a strong personality like Narendra Modi without an equally strong face may or may not work in their favour.

The opposition leaders might be worried that constant bickering over who will be PM might send wrong signals to the voters. They might also be concerned that the BJP will seize on the issue and drive home the point during campaigning by saying that how will those who cannot decide on a candidate rule the country if voted to power. Already, there are daily speculations in the media about this or that leader throwing his hat in the ring. Also, one thing is certain at this stage  Rahul Gandhi, much to the chagrin of the Congress party  is not the automatic choice to be the PM.

But the present decision of postponing of naming the PM candidate works fine for the Congress. For, despite the initial bravado after the CWC meeting naming Rahul as the opposition face, the party had backtracked immediately in the face of repeated salvos from other opposition leaders. The decision to backtrack was based on sound calculation. The party knows that with the BJP experiencing anti-incumbency in Madhya Pradesh and Rajasthan, if it can suppress infighting in its state units there, it is going to get many more seats than it did in 2014. It is also banking on Gujarat, Karnataka and Punjab to shore up its final tally. It also knows that the regional parties that comprise the heavyweights in the opposition front are limited to particular states and cannot get more than 40-50 seats. So the Congress is hoping to get more than that and present them with a fait accompli (of being the largest party) to ensure that Rahul gets the hot seat post the elections  if the united opposition trumps the NDA.