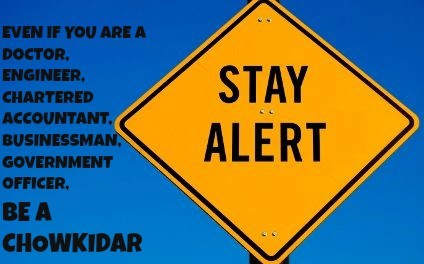 Yes, I Would Like My Children To Be Chowkidars

Yes, I Would Like My Children To Be Chowkidars

Anukriti is a student who dabbles in writing when she finds time. View all posts by this Author
Arvind Kejriwal has asked people to vote for Modi if they want their children to be chowkidars and vote for AAP if they want them to become doctors and engineers.

I am too young to have children, but if and when I have them, I would definitely want them to be chowkidars as well as whatever they want to be.

Kejriwal and all other leaders in the opposition have purposely distorted the meaning of chowkidar to give it a lowly connotation, thereby insulting the people who guard us against peril.

A chowkidar, even in its literal meaning, performs a function that keeps us secure. But what Modi means is for every citizen to be vigilant, to be a chowkidar.

I would want my child to be a doctor if he or she shows an inclination for it, and be vigilant, be a chowkidar, to spot people like Kejriwal who start as fighters against corruption, use someone elses shoulder to fire guns, garner immense publicity on primetime TV and then launch their political career by floating a new political party. I would also want her or him to be vigilant to spot other doctors who prescribe unnecessary tests and medicines or participate in other fraudulent activities in their profession.

I would want my child to be an engineer and be vigilant against other engineers who flout rules to help promoters or contractors, against contractors who use sub-standard material and against politicians who help these contractors.

I would like the whole of India to be chowkidars and be vigilant against people who flout rules and do things that undermine the nation.

There is no shame in being a chowkidar in addition to being whatever you are. It just takes will. But Kejriwal and other opposition leaders will never understand this as they just look the other way  and ask others to look the other way too  if those looting the country are their own people. Modi says na khaunga, na khane doonga. They say, khaunga, par khane nahin doonga. Their chowkidari is limited to preventing others from taking what they think is rightfully theirs.

Yes, I would definitely like my children to be proud chowkidars of the nation, in addition to whatever they wish to be.